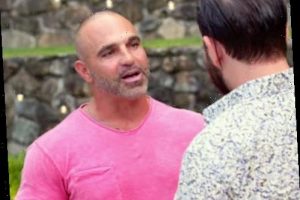 The Real Housewives of New Jersey viewers are well aware that Teresa Giudice likes to lie about money and not pay what she owes to the federal government.

She and her husband both went to prison for bankruptcy fraud.

But what about Melissa Gorga and her husband?

Where do they stand on the seemingly obvious issue of paying one’s debts?

The awkward topic was broached on Wednesday night… when Jennifer Aydin told Melissa that Michelle Pais alleged that Joe owed money after an event the Paises helped put together.

“She said the amount was like tens of thousands of dollars.”

“Tens of thousands?” Gorga responded. “What the f–k are you talking about?”

Joe himself strongly denied this accusation in a subsequent phone call with his wife.

“We had no deal,” Joe emphasized.

“Basically, one of our friends hooked us up. He brought 10 people there to take registrations. And then he gave me a bill and I paid him. Done!”

Joe claimed that, many months after the event, he was approached by Pais’ husband, who asked about this revenue.

Teresa, meanwhile, was selling her Montville home and had a chat with Pais by the pool about GorgaGate.

Why was this her business, asidde from the fact that Joe Gorga is her brother?

Because Teresa said she would not do business with Pais until the controversy is dealth with and all parties satisfied.

“I won’t list my house with you until he clears it up with my brother. It’ll make me feel more comfortable,” she told Michelle on air.

Where did this leave things when the credits rollled?

Nowhere, of course. Bravo must drag this drama out for as long as possible.

Look for the Gorgas to face their accusers on next week’s episode.

And for Teresa to try and get involved as much as she can.

According to various rumors, she’s afraid of getting fired if she does not.

The Real Housewives of New Jersey airs at 9/8c on Bravo on Wednesday nights.