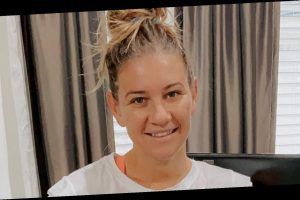 Things have been pretty scary in the Busby household lately. Family patriarch Adam Busby recently revealed that his wife, Danielle, had been admitted to the hospital. “Just made it home, didn’t get a whole lot of answers but will end up seeing a specialist this week for a more thorough workup,” wrote the OutDaughtered star on his Instagram Story on November 15 (via In Touch Weekly). “Thank you for all of the prayers and well-wishes.”

Earlier that day he posted a picture of Danielle in a hospital bed on Instagram. “Crazy how fast your day can turn,” he wrote in the caption, asking people to pray for his wife who was in the ER where tests were being run “for some alarming sensations in her arms and legs.” According to Adam, the symptoms “just happened rather quickly” that day.

Fans flooded the post with comments, including Little People, Big World star Tori Roloff who expressed her support for Danielle.

2020 has been difficult for the Busbys

Danielle’s health scare is part of what has been part of a difficult year for the Busby family. Earlier this year they revealed that they were struggling to homeschool the quints. “From the very beginning, I came up with a routine and a schedule of what we’re going to do,” Danielle told Us Weekly. “With the quints, they just don’t see us as a teacher. They [behave] at school probably way better than they do [with] us as teachers. That balance of trying to get them to focus… is tough.”

The Busbys sent their kids back to school when quarantine restrictions eased, only to face backlash. Still, Adam defended the decision. “Homeschooling six kids is not sustainable for us,” Adam explained in the comments of an Instagram post (via In Touch Weekly).

More hardships came when the Busbys hometown of Lake Charles, La. was slammed by Hurricane Laura this year. “Though the storm spared us and stayed East, it just completely demolished Lake Charles (our home town),” wrote Danielle on the Busby blog, It’s a Buzz World. “Nana, Papa, Grandma and Kayla & girls all evacuated to our house after we saw Laura was going to go straight over them. Thankful everyone is safe, and that is what is most important. Nana & Papa, Grandma, Kayla & David and the girls.. along with all our Aunts, Uncles, Cousins and so many friends have SO MUCH TO REBUILD. The whole entire city needs to be rebuilt.”

END_OF_DOCUMENT_TOKEN_TO_BE_REPLACED

END_OF_DOCUMENT_TOKEN_TO_BE_REPLACED
We and our partners use cookies on this site to improve our service, perform analytics, personalize advertising, measure advertising performance, and remember website preferences.Ok