Amid the current controversy surrounding a heated discussion about racism on The Talk, one of the show’s co-hosts, Elaine Welteroth, took to Instagram Stories on Wednesday to share an inspiring message of forgiveness from the Bible.

“Come to me for understanding, since I know you far better than you know yourself. I comprehend you in all your complexity; no detail of your life is hidden from Me,” the scripture, from Psalm 139:1-4; 2 Corinthians 1:21-22; Joshua 1:5 reads. “I view you through eyes of grace, so don’t be afraid of My intimate awareness. Allow the Light of MY healing Presence to shine into the deepest recesses of your being — cleansing, healing, refreshing, and renewing you.”

“Trust Me enough to accept the full forgiveness that I offer you continually. This great gift, which cost Me My Life, is yours for all eternity,” the passage continues. “Forgiveness is at the very core of My abiding Presence. I will never leave you or forsake you. When no one else seems to understand you, simply draw closer to Me. Rejoice in the One who understands you completely and loves you perfectly. As I fill you with My Love, you become a reservoir of love, overflowing into the lives of other people.” 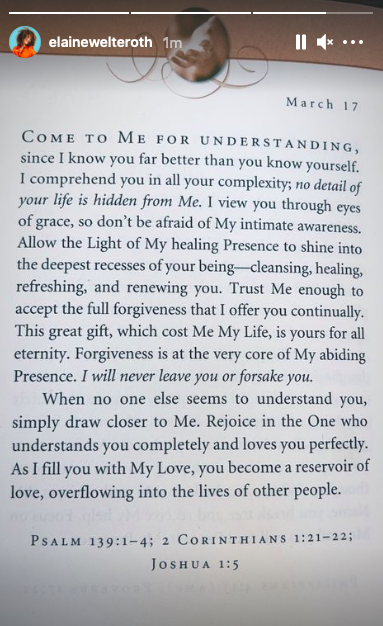 The Talk is currently on an extended hiatus amid an internal CBS review following the show’s March 10 episode. The episode in question contained an emotional debate over co-host Sharon Osbourne’s defense of her friend, Piers Morgan, and his controversial comments about Meghan Markle. Osbourne later apologized on Twitter “to anyone of color that I offended and/or to anyone that feels confused or let down by what I said.”

While speaking to ET on Tuesday, Osbourne said that she is in no way racist and talked about her future on the show. She also revealed that she’s willing to have an on-air conversation to further the conversation about race and make the whole controversy a teachable moment. Osbourne added that Welteroth especially wants to make this happen.

“Elaine does and Elaine very much wants to make this better and to have a conversation come out of this that will help other people and probably people of my age too that would help them,” she continued. “I own up to what I did. I can’t not own up. I said what I said. I got too personal with Sheryl. I should’ve never said stop her tears. She was hurting as I was hurting.”

During another portion of the interview, Osbourne told ET that she’s unsure of what will happen to the show, which has been on hiatus this week and will continue to be until next Tuesday. She also addressed whether or not she’ll return.

Hear more in the video below.