The truth about Alex Trebek’s kids 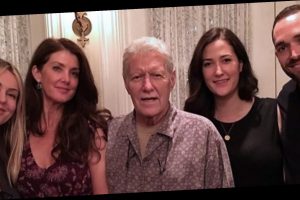 Alex Trebek, the beloved Jeopardy! host who was a part of our lives for over 35 years, made all of us “folks at home” feel like we were actually a part of his family. While fans around the world are mourning the legendary Trebek’s death, so too is the family he left behind: his wife and three grown kids, all of whom no doubt miss him dearly.

Sadly, the one thing Trebek never had in his family, at least not during his lifetime, were grandkids. In an interview last October with CTV News, he admitted: “It does bother me that I might pass on before I get to have a grandchild. Hint, hint.” Despite any disappointment he may have felt over not getting to be a grandpa, Trebek nevertheless enjoyed a close relationship with all three of his children: daughters Nicky and Emily, and son Matthew.

So who are the nex-gen Trebeks?

Nicky Trebek is the daughter Trebek adopted when he married his first wife Elaine in 1974 (via Closer Weekly). Although the marriage ended in 1981, Trebek didn’t cut Nicky out of his life and continued to treat her as just as much of a daughter as he did his later biological one. Nicky today is a singer and a songwriter, but she’s also employed in the TV business, and was lately working on Jeopardy! right alongside her dad.

Next in line is Trebek’s son Matthew, born to Trebek and his second wife, Jean. Mathew is the co-owner of Harlem Mexican street food restaurant Oso, but in an interview with Fordham News, Trebek’s son told his alma mater that his passion for food did not come from dear old dad who “would be fine eating chicken, white rice, and broccoli for the rest of his life.” He did admit that Trebek senior put his handyman skills to good use supervising the construction process of the restaurant, though.

Youngest daughter Emily, a California real estate agent and house flipper, credits her dad for inspiring her to become Ms. Fix-It and says he even helped her rehab her first home. She spoke for all her siblings, not just of that project, but of their entire lives together, when she told Jeopardy!: “I don’t have words to express how much it means to me that he helped.”

END_OF_DOCUMENT_TOKEN_TO_BE_REPLACED

END_OF_DOCUMENT_TOKEN_TO_BE_REPLACED
We and our partners use cookies on this site to improve our service, perform analytics, personalize advertising, measure advertising performance, and remember website preferences.Ok