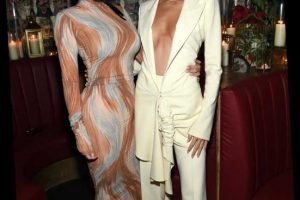 Kylie and Kendall Jenner are in hot water with fans. With millions of people watching their every move, their lives are under constant scrutiny. It’s not easy to keep a perfect track record, but fans are especially upset with the sisters this time around after they vacationed (yet again) during the pandemic. The tweets about Kylie and Kendall Jenner’s vacation to Mexico are intense.

Kendall and Kylie are currently living it up in sunny Costa Careyes, Mexico, and haven’t been shy about showing off their luxurious trip. The ladies are staying at the Peninsula de las Estrellas, according to TMZ, and their 6-bedroom villa has no shortage of jaw-dropping views.

Kylie showed her followers just how "dreamy" her view was on Jan. 20, when she shared a photo of a picturesque sunset. She later posted a pic from their 360-degree infinity pool which featured ocean views.

Kendall also shared some poolside memories, where she was seen laying out and catching a tan in an orange bikini. Fans were less than thrilled with all of the glamorous snapshots, and took to Twitter to slam both reality stars for their inopportune vacation timing.

One fan pointed out the sisters are seemingly oblivious to the thousands of people who have died from the coronavirus.

Everyone seemed to have major questions about the trip.

The girls’ Mexico excursion wasn’t the first controversial trip they’ve taken during the pandemic. They faced backlash when they celebrated Kim Kardashian’s 40th birthday on a private island in October. At the time, Kardashian justified her family trip by telling fans everyone had gotten tested before flying.

"After 2 weeks of multiple health screens and asking everyone to quarantine, I surprised my closest inner circle with a trip to a private island where we could pretend things were normal just for a brief moment in time," she tweeted at the time.

Kardashian’s tweet drummed up criticism, but it looks like her sisters didn’t take the scandal as a learning lesson. They’re still traveling, and the criticism is still rolling in.