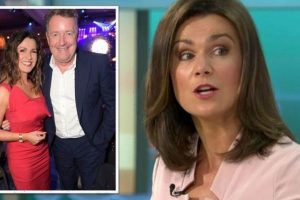 Good Morning Britain presenter Susanna Reid has been nominated for a TRIC Award, with the star-studded ceremony taking place later today. The 50-year-old ITV star is shortlisted for the News Presenter of the Year accolade, but unfortunately so is her former co-star Piers Morgan.

The pair are also competing against BBC newsreader Huw Edwards, 60, for the Television and Radio Industries Club Award.

Piers took to social media this morning ahead of the ceremony, to share his thoughts on the matter.

“Looking forward to the prestigious @TRICawards later today,” he wrote online, in view of his eight million followers.

“I’m nominated for News Presenter of the Year, up against @thehuwedwards and someone called @susannareid100.

Piers included pictures of his rivals alongside the post.

“This’ll be fun…” Susanna wrote online followed by a laughing emoji, when she shared the post with her own followers.

At the time, Piers joked that the pair, who have won the accolade 20 years on the trot, were cheating.

“If they had to do this individually, how would they get on? I think it’s actually cheating to do it as a pair,” he said.

“I deserve to win because everyone’s sick and tired of Ant and Dec automatically winning this award, which bears no relation to reality,” he told The Mirror ahead of the ceremony.

Also in their category were This Morning stars Holly Willoughby and Alison Hammond as well as The Chase host Bradley Walsh.

When Ant and Dec, who are best known for fronting reality show I’m A Celebrity… Get Me Out Of Here!, inevitably won the award, Piers, who watched the ceremony on television at home, took to Twitter.

“Thoroughly deserved 20th consecutive win – the way they held those jungle contestants to account during the pandemic was absolutely brilliant #ntas,” Piers added.

Ant and Dec are in a separate category for the TRIC Awards 2021, taking on Alison and Bradley once again in the best TV personality grouping.

Many took to Piers’ post today to wish him luck at the TV event.

“Good luck…. This one better be yours. Especially with everything you did during the pandemic. You need recognition which you haven’t had. So best of luck,” Twitter user DrewMiller007 wrote.

“This would be well deserved Piers, good luck! You deserve it. Hope to see you back on TV soon,” added user ashleighbli.

“Can you imagine the tantrum he’ll have if Susanna wins it?” Tutbury16 remarked, adding several laughing emojis.