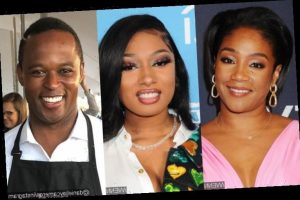 The ‘Girls Trip’ star likens photos from the Kentucky Attorney General’s engagement party with his white fiancee to a scene from movie ‘Get Out’ as he lets Breonna Taylor’s killers on the loose.

AceShowbiz -Kentucky Attorney General Daniel Cameron is under fire after photos of his engagement party surfaced online. The Republican politician caught heat for celebrating his betrothal to his fiancee instead of charging Breonna Taylor’s killers.

Among those who weighed in on Daniel’s engagement photos were a number of celebrities, namely Tiffany Haddish and Megan Thee Stallion. The actress/comedian likened photos from the 51st Attorney General of Kentucky’s engagement party with his white fiancee to a scene from Jordan Peele‘s horror film “Get Out“.

“This looks like a Scene from the movie get out,” she quipped underneath a post by fellow actress Amanda Seales, who shared another user’s post. The original poster also slammed Daniel as writing in the caption, “Instead of charging the killers of #BreonnaTaylor ….. Kentucky Attorney General Daniel Cameron had an engagement party this weekend.”

Megan shared the post on her own page and wrote along with it, “So of the tables were turned I wonder how he would feel. He really just does not care.” She went on demanding justice for the slain young black African-American woman, “ARREST THE OFFICERS THAT KILLED BREONNA TAYLOR.”

Beyonce Knowles‘ mother Tina Lawson was also enraged after seeing the pictures of Daniel’s engagement party. “I was shocked to learn that the attorney general for Kentucky is a 34 year old black man. When Breonna’s Mother Tamika asked to speak with him, he had someone else call her.!” she posted on her own account.

She added, “I have no problem with who he marries, that is his personal business. That is not what this post is about! I just don’t understand his actions!!!” She went on criticizing everyone in the party for ignoring the COVID-19 guidelines by ditching their masks, asking, “And where are their masks?”

Breonna died on March 13 during a police raid at her home in Louisville. Three plainclothes LMPD officers executed a no-knock search warrant in search of Jamarcus Glover and Adrian Walker who were suspected of selling controlled substances from a drug house more than 10 miles (16 km) away.

Breonna’s house was included in the search warrant because the 26-year-old emergency medical technician had a prior relationship with Jamarcus. Breonna was killed during a shootout between her boyfriend Kenneth Walker and the officers.

Brett Hankison, one of the officers involved in Breonna’s death, got fired from the Louisville PD, but no criminal charges have been filed.

More than 100 days after Breonna’s death, Rihanna also questioned why the killer are still on the loose. “over 100 days after #breonnataylor was MURDERD!! Her killers are at home watching Netflix on the couch. WTF is America?!” she posted on June 26. She added in the caption, “yerrrrr @danieljaycameron , where we at with this my brother?!”

END_OF_DOCUMENT_TOKEN_TO_BE_REPLACED

END_OF_DOCUMENT_TOKEN_TO_BE_REPLACED
We and our partners use cookies on this site to improve our service, perform analytics, personalize advertising, measure advertising performance, and remember website preferences.Ok