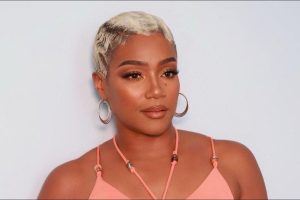 The ‘Girls Trip’ actress takes to social media to express her gratitude to God for ‘redecorating’ her life and removing ‘the mess’ after a sex abuse lawsuit against her is dismissed.

AceShowbiz –Tiffany Haddish is grateful God has “redecorated” her life after facing a sex abuse lawsuit over a 2014 comedy skit. The “Girls Trip” star was named a defendant along with fellow comedian Ariel Spears by a 22-year-old plaintiff – known only as Jane Doe.

The woman filed a civil case against the pair in August on behalf of herself and her brother, accusing them of intentional infliction of emotional distress, gross negligence, sexual battery, sexual harassment and sexual abuse of a minor in relation to a 2014 comedy sketch titled “Through a Pedophile’s Eyes”.

The plaintiff asked the case be dismissed with prejudice last month, meaning she cannot refile the same allegations again and Tiffany has now insisted she’s getting on with her life, writing in a post on Twitter, “God has been redecorating my life lately and I must say at 1st I was very uncomfortable.”

The 42-year-old comedy star added, “But I see where he is going with it and I am so much better off. Thank You God! You are the best at getting rid of the mess. (and when I say mess you know who and what I mean God) Amen.”

After the lawsuit was filed, Tiffany admitted she “deeply regretted” taking part in the sexually-explicit sketch, which was filmed in 2013 and published on “Funny Or Die” in 2014 but removed from the website four years later.

In a statement on Instagram, she explained, “I know people have a bunch of questions. I get it. I’m right there with you. Unfortunately, because there is an ongoing legal case, there’s very little that I can say right now.”

“But, clearly, while this sketch was intended to be comedic, it wasn’t funny at all – and I deeply regret having agreed to act in it. I really look forward to being able to share a lot more about this situation as soon as I can.”

Her attorney also described the lawsuit as “frivolous.”