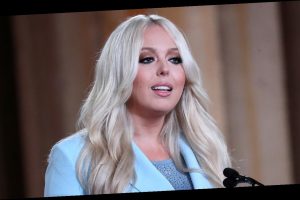 Tiffany Trump seems to have done more harm than good by speaking at a “Trump Pride” event in Florida over the weekend.

The 27-year-old daughter of the President of the United States spoke at a hotel in Tampa Bay and tried to claim that her father supports the LGBTQ+ community, despite his administration rolling back laws that protect them.

While talking about the community, Tiffany noticeably left out the “T” in the LGBTQIA+ acronym. Even though it could’ve been a mistake, lots of people think that she intentionally dropped the “T” as her father’s administration has not been supportive of the transgender community.

“I know what my father believes in. Prior to politics, [my father] supported gays, lesbians, the LGBQIA+ community,” Tiffany said in her speech.

Tiffany also referenced the “fabricated lies” she claims have been made about her family’s views. She said, “It saddens me. I have friends of mine who reach out and they say how could you support your father, we know your best friends are gay… I say it is because my father has always supported all of you.”

END_OF_DOCUMENT_TOKEN_TO_BE_REPLACED

END_OF_DOCUMENT_TOKEN_TO_BE_REPLACED
We and our partners use cookies on this site to improve our service, perform analytics, personalize advertising, measure advertising performance, and remember website preferences.Ok