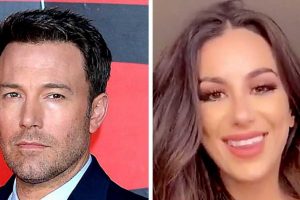 Dating fail! Ben Affleck sent a TikTok user a personal message after she denied him on a dating app thinking his profile was fake — according to actress Nivine Jay.

Jen! J. Lo! All of Ben Affleck’s Loves and Flings Through the Years

“Thinking of the time I matched with Ben Affleck on Raya and thought it was fake so I unmatched him and he send me a video on Instagram,” actress Jay wrote via TikTok alongside a video of her looking upset on Monday, May 3.

The clip was accompanied by four skull and crossbones emojis and featured the aforementioned video shout-out from the Oscar winner.

“Nivine, why did you unmatch me?” Affleck, 48, asked in the video, which showed him wearing a red T-shirt inside his room. “It’s me!” 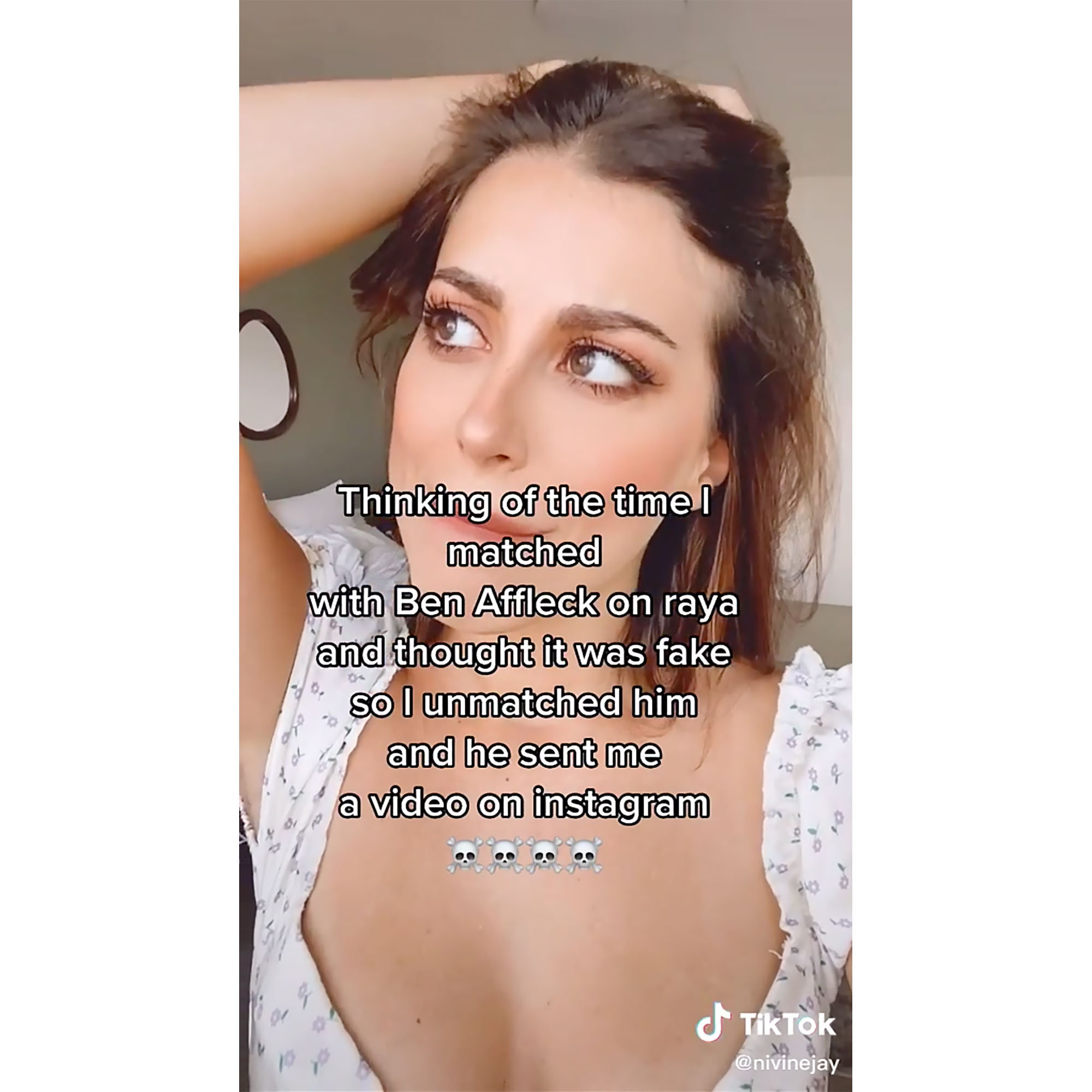 Affleck previously joked about using Raya in October 2019, tweeting at the time, “HA, you got me. I’m dating.” He then gave the Midnight Mission a shout-out, asking the dating app to donate to the organization alongside him. “I’m making a donation today because there are people battling addiction every day that don’t have the resources and need help. Raya, you in? Who else is with me?” he concluded.

The Argo producer, however, isn’t the only star to turn to online dating to find romance. In fact, many Hollywood A-Listers joined the app Raya after splitting from their significant others. 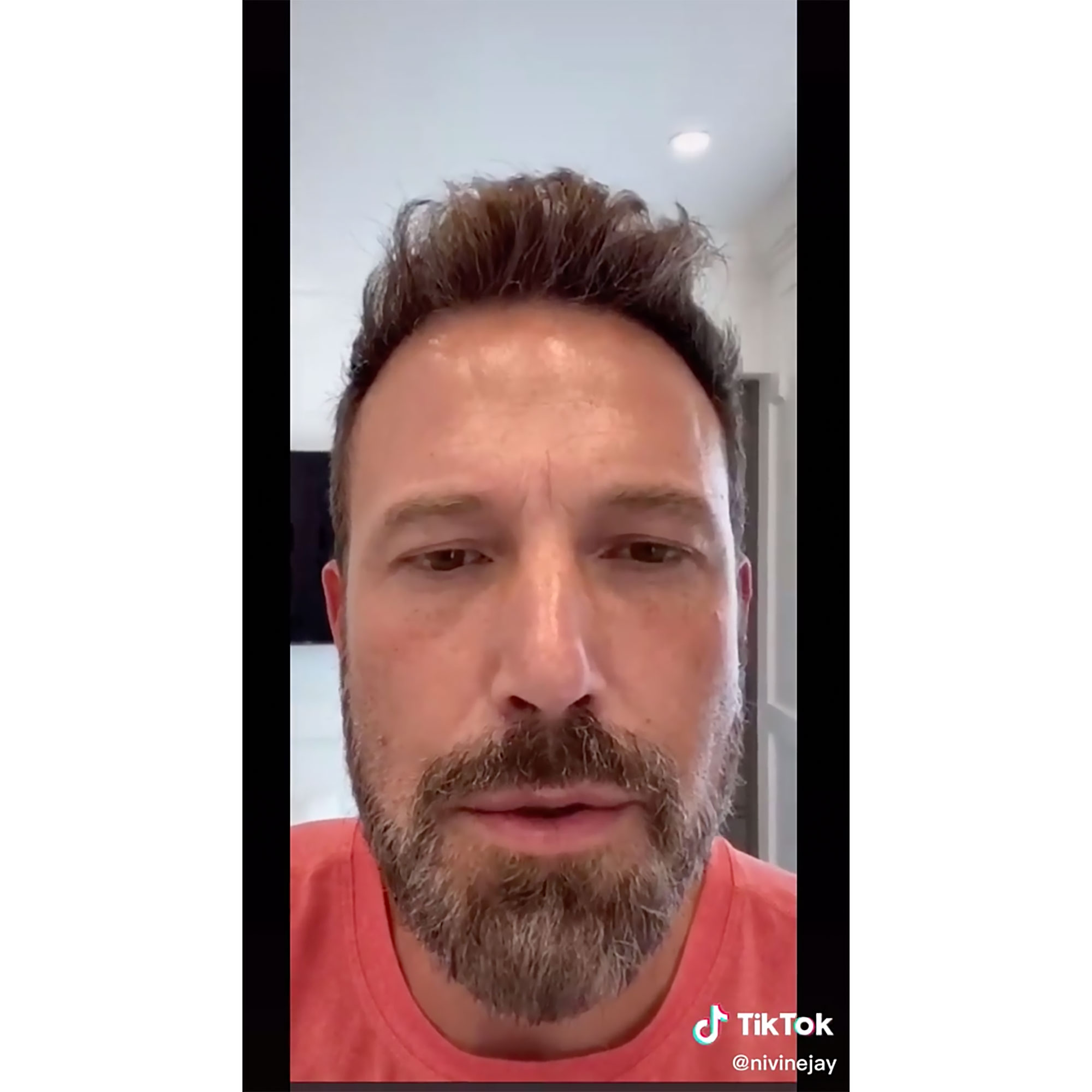 Channing Tatum, for example, turned to the dating site following his initial breakup with Jessie J in November 2019, a source exclusively told Us Weekly the following month. According to the insider, the Magic Mike star’s profile read, “And yes, I used to be a stripper. Sorry.”

Kiernan Shipka, and Demi Lovato have both opened up about using the app to find a relationship when single.

While Affleck’s online escapades aren’t always a hot topic, his love life has been in the headlines on more than one occasion over the past week. The Gone Girl star caused a stir on Friday, April 30, after news broke that he had been spending time with his ex-fiancée Jennifer Lopez following her split from Alex Rodriguez earlier in April.

Us confirmed that the exes have been in contact after the New York Post’s Page Six reported that the Massachusetts native had been spotted going to the Hustlers star’s house on multiple occasions in Los Angeles earlier in the month.

The duo met while filming Gigli in 2001 and were engaged from 2002 to 2004. Affleck revealed that the pair are still on good terms when he spoke kindly of the “Jenny From the Block” singer, 51, in her InStyle May cover story which was published last month.

“Where are you keeping the fountain of youth? Why do you look the same as you did in 2003 and it kind of looks like I’m in my 40s … at best?” he said of the New York native. “I thought I had a good work ethic, but I was completely humbled and blown away by what she was committed to doing day in and day out, the seriousness in which she took her work, the quiet and dedicated way she went about accomplishing her goals, and then how she would go back and redouble her efforts.”

Following the former flames’ split, Affleck went on to marry Jennifer Garner in 2005. The pair, who share daughters Violet, 15, and Seraphina, 12, and son Samuel, 9, separated in June 2015. They finalized their divorce three years later.

Lopez, for her part, was married to Marc Anthony from June 2004 to June 2014. The Second Act star and the “You Sang to Me” musician, 52, share 13-year-old twins Max and Emme. The Grammy nominee was then engaged to Rodriguez, 45, for two years before the duo announced their separation on April 15.

Us Weekly has reached out to Affleck for comment.