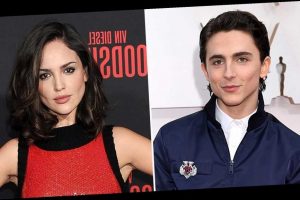 New couple? Timothée Chalamet and Eiza González were spotted getting cozy while on a trip to Cabo San Lucas, Mexico, together.

The Call Me By Your Name actor, 24, and Baby Driver actress, 30, spent time together by a pool on Tuesday, June 23, while in González’s home country. In photos posted by TMZ, the stars were seen flirting and sharing a kiss outside.

Chalamet wore a pair of athletic shorts and a red shirt, which he later took off to reveal blue boxers before going in for the smooch. The Bloodshot actress, on the other hand, donned a cream-colored bikini and sunglasses.

In one photo, the Little Women star played the guitar for the actress as she smiled at him. Another snap revealed the two walking toward the pool as González carried a beer in her hand.

The pair’s getaway came two months after Us Weekly confirmed in April that the New York native and Lily-Rose Depp had split after more than a year of dating.

Us broke the news in October 2018 that Chalamet and Depp, 21, were dating after they were spotted kissing in New York City that month.

“They were pretty playful and flirty with each other,” an onlooker told Us at the time, adding that they looked like “a new young couple in love.”

The former couple was last photographed together in September 2019 while on a boat in Italy.

González, for her part, was spotted “looking cozy” with Jeremy Renner in February at a pre-Super Bowl party in Miami. An onlooker revealed to Us at the time that the Avengers: Endgame star was “pretty flirtatious” as he sat in a booth with the Fast & Furious Presents: Hobbs & Shaw actress.

A source later told Us exclusively that “there’s nothing romantic going on with them and they didn’t have a fling at the Super Bowl.”

The insider added: “It’s Eiza’s personality to dance and have fun with her friends.”

Two years prior, the True Love alum met Josh Duhamel at Jennifer Lopez’s pre-Super Bowl concert where they “partied together until very late,” according to a source. The two dated for five months, calling it quits in July 2018 because “they just drifted apart.”

González currently follows Chalamet on Instagram and “liked” his photos starting in February 2020.