‘Together again!’ Homes Under The Hammer stars Martin Roberts and Lucy Alexander reunite 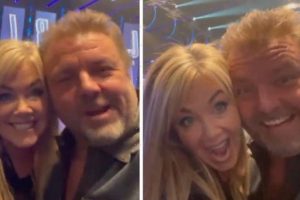 Martin Roberts and Lucy Alexander are on Celebrity Catchpoint

Martin Roberts hopped onto his Twitter page and shared a video of him and Lucy on the set of the popular game show earlier tonight. The show sees contestants aim to answer questions asked by telly presenter Paddy McGuinness before catching balls of various sizes which drop from the ceiling.

The more balls contestants catch, the bigger the prize.

Taking to Twitter to gush about his reunion with Lucy, the 58-year-old wrote: “Sooo nice to be working with My lovely screen wife @LucyAlexanderTV again. (sic)

“Raising money for charity and laughing so much it hurts, so wish us luck and watch out for it on TV soon.”

A video of him and Lucy followed his tweet as they gushed about their upcoming appearance on the BBC programme.

When the property expert asked his fellow colleague how she felt, Lucy quipped she was “very good at catching balls”.

The video came to a close with Lucy jokingly asking Martin whether he should be touching her, which appeared to have been an innocent dig about social distancing guidelines amid rising Covid-19 cases.

Fans shared their excitement about the pair taking on the game show in the comment section of the tweet.

Twitter user @gdadbrowwn wrote: “Real treat to see the two of you.”

@SusanMo22368032 seemed curious to know when the special will be airing as she tweeted: “Do you know when and what screen it will be shown on?”

The special, which will air on BBC One, has yet to be given a release date.

Martin has been feeling charitable in recent weeks, having taken part last month in ITV’s Strictly The Real Monty in a bid to raise awareness for cancer.

His decision to sign up for the programme was motivated by the passing of his best friend Dave Hughes, who died of bowel cancer in 2017.

Taking part in the ITV series is a big step for Martin, who admits having dealt with “body issues” in the past.

He recalled his conversation with show bosses, telling Express.co.uk in December: “I was approached to do this, and my initial reaction was ‘You’ve got to be kidding me!’

“I have, like a lot of people, have a body issue thing going on. I mean, I was very badly bullied for being fat as a child.”

He continued: “So, you know, my image has been very badly skewed by that.”

“The idea of being laughed at in adult life, when I was laughed at in child life, is something that was fairly outside of my comfort zone.”