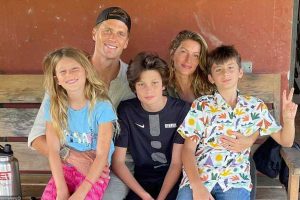 After months of living apart, the NFL star and the Brazilian supermodel swiftly finalized their divorce on October 28 thanks to ‘ironclad prenup’ they signed a few years prior.

AceShowbiz –Tom Brady and Gisele Bundchen have agreed to joint custody of their kids, 12-year-old Benjamin and 9-year-old Vivian. According to a new report, the now-exes will allow their children to have “full access” to both parents. Many have since applauded the former couple for their amicable split.

PEOPLE reported on Thursday, November 3 that neither parent will stop any child from seeing the other. A source told the outlet, “They can see whichever parent they want. They’ve got a schedule, but neither of them would prevent their kids from seeing the other parent. The kids adore them both, and they’ll have full access to both, whenever they want. They’re not vindictive like that.”

The insider went on to insist that none of the children will be used as “pawns” and insisted that they will both be loved equally. The insider added, “These kids won’t be used as pawns. They’re going to be loved and cherished by both parents.”

Social media users were left in awe upon learning of the NFL star and the supermodel’s decision to stay amicable despite their separation. “Kudos!!! This is what putting the kids first should look like for everyone. Hope they both stick to the plan and allow the kids to full access to both parents. Good job!!!” one person opined. Another praised, “That’s nice of them.” A third chimed in, “Oh thank goodness… I was so worried about the custody of these children… it kept me up at night with worry…”

Earlier this week, it was said that the kids have been “slowly getting used” to the idea of their separation for some time. A source claimed to PEOPLE, “Tom is always happy when he is with his kids. The kids have slowly been getting used to spending separate time with Tom and Gisele. They lived separately for months.”

“When the kids are with Tom, he tries to make it fun with various kids’ activities. He is a very involved dad. You can tell that he loves being a dad,” the so-called source added. “[Gisele] worked with Tom to make sure their divorce was as smooth as possible. The focus is on their kids. Gisele knows the kids will be okay when they are with Tom. She thinks he is a great dad.”

The insider went on to explain that the pair “haven’t had the same goal” for their marriage but do have the same goal when it comes to their children. The source further noted that the 42-year-old Brazilian supermodel is “grateful” for the years she has spent with the Tampa Bay Buccaneers quarterback.

“They obviously haven’t had the same goal for their relationship, but they do for their kids. They will continue to work hard to make sure things will be as good as possible for the kids,” so said the insider. “Gisele couldn’t be prouder of her kids. She tries to stay in a positive place. She is grateful for all the years with Tom. She is ready for a new chapter now though.”

After months of living apart, Tom and Gisele swiftly settled their divorce on October 28 thanks to “ironclad prenup” they signed a few years prior. The catwalk star was the one who filed for divorce in Glades County, Florida following alleged disagreement over his football career.

The seven-time Super Bowl champion, who explained that they had split “amicably” and vowed to be a “great father” for the kids, did not contest the filing though he reportedly “didn’t want” to get divorced.