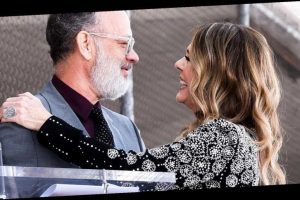 After 30 years of marriage, the Hollywood power couple seem more in love than ever and they have just revealed what a typical date night looks like.

Tom Hanks first developed a crush on Rita Wilson in the 70s.

He was 16 and watching The Brady Bunch at a friend’s house when he saw Wilson appear as cheerleader Pat Conway. He thought: ‘That girl’s cute’.

More than a decade later, the pair met in person on the set of Bosom Buddies, which starred Hanks, when Wilson made a guest appearance.

While they stayed just friends, the couple officially debuted their relationship at the premiere of Three Amigos in 1986 and were married two years later.

Now, after three decades of marriage, a Nora Ephron rom-com, two children, beating cancer and helming multiple creative projects together, the celebrity power couple appear to be very much in love.

The secret? For starters, it could be, at least in part, because the couple clearly know their way around a really, really great date night.

At the Screen Actor Guild Awards last night, Hanks, who was nominated for best supporting actor for his role in A Beautiful Day in the Neighbourhood, and Wilson revealed that their ideal evening together involves “sweatpants” and a “a good movie on DVD”.

“It’s changed a little,” Wilson told People, when asked about a typical date night for the couple. “We’re happy to stay home on a date night because we go out so much. It’s just really, really nice to stay home and watch a great movie.”

Hanks added: “Here’s when I know a night like that is gonna be great: When she says, ‘Honey, can you whip me up a little martini? And then I know that’s gonna be a nice night.”