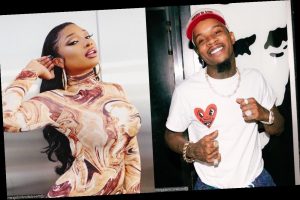 AceShowbiz -Is Tory Lanez shading his rumored former fling Megan Thee Stallion? The Canadian rapper raised people’s eyebrows with a cryptic post on his Twitter page on Thursday, January 7, prompting people to think that it contained a hidden message for the Hot Girl Summer.

“Sometimes u gotta just stand outside … to remind yourself your ‘Outstanding’,” wrote the “Quarantine Radio” host on the blue bird app, adding several laughing emojis. While he didn’t offer more context, people thought that Tory was shading Megan with the “Oustanding” word.

The speculations arose after someone noticed that the similar phrase was featured in the lyrics for one of Megan’s songs titled “Girls in the Hood”. On the song, the Houston raptress rapped, “I don’t stand outside ’cause I’m too outstandin’.”

Tory quickly caught wind of the wild theory and shut it down in a follow-up tweet. “I see where some of y’all are tryna take this .. AHT AHT,” so he wrote alongside a picture of what seemed to be a magazine featuring a sentence that read, “I’m gonna stand outside. If anyone asks tell them I’m outstanding.”

He went on to add, “it’s too early…. just let me finish my blunt and go bout my day in peace.” Tory appeared to delete the tweet, but re-posted it on Instagram Stories.

Seeing that it wasn’t enough to end the speculations, the “Jerry Sprunger” spitter doubled down on his remarks in a comment underneath TheNeighborhoodTalk’s Instagram post. “STOP F***ING REACHING,” he called out the Instagram blogger. “u can see clearly in my story where the line from … stop tryna put me in drama all the time.”

Fans, however, didn’t buy Tory’s words. “he knew what he was doing but ok lol,” one fan wrote. “not really a reach judging from her lyrics same way you tweeted ‘can’t take d**k’ during her Cry Baby hype …… just gas lighting smh,” another fan opined. Alluding that he should have seen it coming, one other commented, “you did this too yourself , you knew what you was doing tf.”

END_OF_DOCUMENT_TOKEN_TO_BE_REPLACED

END_OF_DOCUMENT_TOKEN_TO_BE_REPLACED
We and our partners use cookies on this site to improve our service, perform analytics, personalize advertising, measure advertising performance, and remember website preferences.Ok