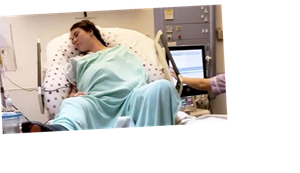 The Only Way Is Essex star Shelby Tribble has spent the last three days in hospital and is set to give birth to her baby boy very soon.

The former reality star is preparing to welcome her first child with her former co-star and boyfriend Sam Mucklow.

The father-to-be shared a snap of Shelby on his Instagram stories in which we can see that she is lying in a hospital bed hooked up to monitors.

The 27 year old has her eyes closed in the footage, and can be seen with her hair in braids as she rests on a star-patterned pregnancy pillow.

In his post Sam explained that his girlfriend had already been in hospital for three days and the pair were hoping their child would be arriving into the world today.

He wrote: "So proud of this girl, almost three days in hospital fingers crossed little man should arrive today,” alongside a blue love-heart emoji.

It seems that it won’t be long before the stars become proud parents. On Saturday 14 November, the pair posted footage of a baby seat in the back of a car with the caption “coming soon”.

During her pregnancy Shelby has opened up on suffering from heartburn and swollen feet, among other things.

When Shelby reached the 27 week mark of her pregnancy she said although it may seem like she is having a very easy pregnancy, she had been suffering from side effects.

The star wrote: “27 weeks today. Although I may look glam and have had the best pregnancy you can wish for… the heartburn, swollen ankles/feet, back ache, leg cramps and chafing are all staring to play their parts.”

She also recently took to Instagram to share details on her final few weeks, revealing that her baby had been in the breech position until he'd turned himself around.

"Our baby boy was in the breech position up until yesterday after a check up where we were told that he has been a good boy and turned himself around (head down).

TOWIE stars: Past and present

"Just under 4 weeks to go so it’s feeling very real now, super excited but not going to lie for the first time I’m a little nervous that he’s got to come out soon."