Home » Celebrities » TOWIE’s Nicole Bass being kept in hospital after birth of daughter: ‘My anxiety is crazy!’

TOWIE’s Nicole Bass being kept in hospital after birth of daughter: ‘My anxiety is crazy!’ 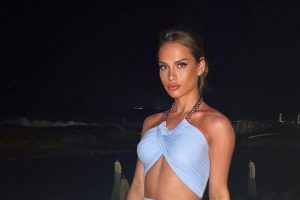 Many new mums struggle after giving birth, but former TOWIE star Nicole Bass has suffered more than most.

The businesswoman revealed on Saturday morning that she has been kept in the hospital following the birth of her first child Bella Rose earlier this month.

In a heartfelt post on Instagram, Nicole apologised to fans for being absent from social media and explained that she has experienced intense anxiety, saying it has been “crazy with everything that's gone on with my body”.

She wrote on her Instagram Story: “It's easier to write this as I have had loads of DMs asking if I'm okay I know l've been off socials.”

“I Havant been too well since baby girl was born unfortunately it's been one thing after another the recovery after birth isn't always a smooth ride," Nicole continued.

“I'm currently in hospital I had to stay the last 24 hours due to high blood pressure lv [sic] had continuous & my bloods being off which has all stabilised now however ll [sic] need to remain on some meds for my blood pressure ect [sic] till that resolves my anxiety has also been crazy with everything that's gone on with my body.

“I'm hoping I can be home today as I miss my baby & being away from her has been horrible I will reply to those who have messaged me once l'm back on feet! Thanks for your kind messages x.”

Nicole suffered a difficult birth when she welcomed her daughter earlier this month.

The star had been due to give birth on 22 October but her little girl arrived nearly two weeks later on 7 November.

Nicole shared her joy at becoming a mum last week, when she shared a sweet picture of the newborn.

She wrote in the caption: “Welcoming our baby girl Bella Rose. Born 7/11/22 at 2am, our little girl weighed 6 lb 14oz. Our hearts are full I have never felt a love like it you are a dream Bella.”

The following day, she shared her birth story in an extensive Instagram Q&A, telling her followers that she felt “disappointed” by the hospital.

She wrote: “I was really disappointed and let down with the hospital. They induced me and then took it out as I was moaning with pains, they said it would help slow the contractions down! The pains got worse and I was literally begging them to help me with some pain relief, I was in fact crying at one point!

“I was hit with something to make me drowsy and sleepy, probably trying to shut me up as I was by this point in agonising pain!

"Two DRs even came down and said you're one centimetre dilated without even checking me, just taking the word of the midwife who I had been begging to help me! They said, 'I'll come back in six hours,' this was at 12pm. Two hours later I had her, imagine!”

However, she did thank one member of staff, adding: “An amazing Dr came in as well as around 10 different medical staff! She said I was fully dilated & I started to push as my baby's heart was dropping on the monitor, it went to 50 at one point, thank God she was okay. Always listen to your body, you know best!

“If it wasn't for that Dr I don't even know what would be she literally got me through it was super fast and extremely hard as I was so drowsy and in pain.

"The relief when she came to me and finally someone who acted straight away as I was fully dilated she was flipping my saviour unlike the other DRs who dismissed me tow hours before.

“But she's here and safe main thing. Just grateful and blessed for her!"

The TOWIE star shares Bella Rose with her long-term boyfriend, who prefers to stay out of the spotlight.