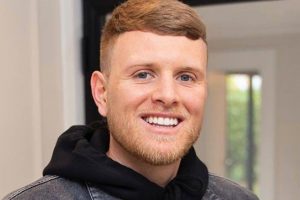 Tommy Mallet has shared an adorable new image of his newborn son Brody after welcoming a baby boy with girlfriend Georgia Kousoulou.

Georgia, 29, gave birth on Wednesday, announcing the safe arrival of her and 28 year old Tommy's bundle of joy on Friday.

The Only Way Is Essex star Tommy has now taken to social media to share a brand new snap of the tot resting in a family member's arms as he looks up to speak to them.

Doting dad Tommy simply said he was "obsessed" with his newborn in the image, which he shared with his one million Instagram followers.

Tommy's upload comes just one day after Georgia, who stars alongside her boyfriend on TOWIE, paid gushing tribute to her boyfriend in her own social media post.

Sharing an image of herself cradling baby Brody shortly after the birth, Georgia wrote to her own 1.4million followers: "Thank you for all your messages. I feel so blessed, the best experience of my life.

"@tommy_mallet I didn't think I could love you more than I did already.. you are the best x."

A few hours prior, Georgia and Tommy announced the happy news of their son's arrival, once again on Instagram.

Next to a snap of her in a hospital bed holding the newborn, the first-time mum penned: "Introducing you Brody Fordham, 05.05.21 weighing 8lb 9.

"We are so in love," she concluded, alongside numerous heart emojis.

The tot was delivered via a planned Caesarean after Georgia discovered he was in the breech position.

TOWIE stars: Past and present

A source close to Georgia and Tommy exclusively revealed to OK!: "Little Brody is perfect and everyone is so excited to meet him."

The first time mum revealed the change to her birth plan, telling fans: "So baby is coming earlier than we thought because I'm having a C-Section. Baby is breech.

"But because of that, I have not stopped. I know everyone keeps saying you need to rest, but he’s coming quicker than we thought so I’ve had to get organised."