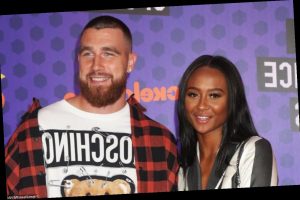 The model and founder of fitness brand Strong Is Sexy posts on Instagram a picture of her posing in a box at the Florida stadium while donning a trendy matching bra top and white pants.

AceShowbiz –Travis Kelce‘s longtime girlfriend Kayla Nicole showed public support for the Kansas City Chiefs tight end despite the team’s loss to the Tampa Bay Buccaneers during Super Bowl LV on Sunday, February 7. Taking to her Instagram account, Kayla appeared to take a jab at the referees of the game.

She posted a picture of her posing in a box at the Florida stadium while donning a trendy matching bra top and white pants. “Holding: the illegal restraining of another player who is not in possession of the ball,” she wrote in the caption, adding, “Holding is prohibited in most football leagues, unless you’re playing against Tom Brady.” However, she then changed the caption of the post to simply read, “go team.”

Prior to that, the founder of fitness brand Strong Is Sexy posted some criticisms on her Twitter account during the game. “If yall wanted to see the Chiefs vs the refs just say that,” she tweeted. But she acknowledged Buccaneers’ win as she then congratulated Buccaneers for its victory in a tweet that read, “Congrats to the @Buccaneers. Tough game to watch but y’all got it.”

Travis and Kayla started dating in 2017 but they split in August 2020. The pair, however, got back together by December, as TMZ reported that the athlete once again called the model his girlfriend during a question and answer session with WNBA’s Chiney Ogwumike. He also gushed over Kayla in the interview, saying, “She’s the absolute best.”

Kayla previously revealed that they first met on Instagram. “He Insta stalked me. I DM’d him. The end,” she shared. She also hinted at being serious in her relationship with Travis as she told her Instagram followers while playing True of False game in January, “I am ready to be a wife though. COUGH COUGH COUGH COUGH.”