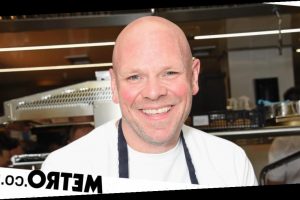 Tom Kerridge has been fighting to save Britain’s pubs amid the uncertainty of the coronavirus pandemic so it’s no surprise that he felt incredibly ‘disheartened’ to see the venues boarded up and closed after struggling to survive.

The TV chef’s upcoming BBC Two series, Saving Britain’s Pubs with Tom Kerridge, will see him visit treasured locals across the country which are on the threat of closure and help them to get back on their feet.

Filming was interrupted due to the coronavirus pandemic but meant the three-part series could then focus on how the hospitality industry will be impacted by the health crisis.

However Britain’s pubs are now facing a second blow following Boris Johnson’s announcement that England will go into a second lockdown from Thursday.

Tom, 47, originally spoke to Metro.co.uk before the second lockdown was announced but he’s now reacted to the looming lockdown restrictions and told us: ‘Speaking as a pub landlord, with the arrival of the second lockdown it’s given us a huge body blow to the pub sector which was already on the ropes.

‘We were able to reopen at the beginning of July when many pubs had spent a great deal of money on health and safety protocols, due diligence and risk assessments. The restricted numbers mean that turnovers were way below expected figures, but as an industry we were very happy to be reopened.

‘For those that were beginning to see the green shoots of at least a little hope that they may be able to get through this, this second lockdown is decimating.’

Tom said he ‘welcomes’ the recently extended furlough in light of the new lockdown but says the government needs to do ‘a lot more’ for pubs economically.

Many local pubs barely opened their doors when restrictions eased this summer and the future is looking even more bleak in light of the news.

Explaining what it’s like to see pubs suffer during this time, Tom said: ‘It’s incredibly sad to see these historic buildings and there’s nothing more disheartening to see a pub that’s boarded up.

‘It means much more, it’s not just a building, it’s the heart of the community, a soul, a heartbeat, a place where stories are told and people meet.

‘So when you see a pub that’s in disrepair, you do worry about the bigger picture of it but the industry is one that needs to adapt and grow with modern times.’

He added: ‘The industry is in a difficult and precarious position but there are a lot of positives to think of for the future.’

Tom gives credit to the government for Rishi Sunak’s Eat Out To Help Out scheme, which resulted in a significant boost in profits for the hospitality industry after they were forced to shut doors in March.

‘I think the Eat Out To Help Out scheme was incredibly successful for two reasons,’ Tom said, continuing: ‘One it encouraged people to come out and support hospitality businesses whether they were high street names or locally independent.

Partly filmed in the middle of the pandemic, Savings Britain’s Pubs captured exactly how pubs across the country faced the uncertainty of the dire situation.

Tom revealed: ‘It was filming throughout, we captured everything.

‘The process was me trying to help out four pubs and see what issues they were facing and the different business models they have and how we can try to solve them.

‘Halfway through filming this comes along so it’s not just about helping and solving their businesses.

‘We suddenly become one big family trying to work out what’s going on altogether.’

MORE : Sam Smith feels ‘so much pleasure sexually and personally’ since coming out as non-binary

END_OF_DOCUMENT_TOKEN_TO_BE_REPLACED

END_OF_DOCUMENT_TOKEN_TO_BE_REPLACED
We and our partners use cookies on this site to improve our service, perform analytics, personalize advertising, measure advertising performance, and remember website preferences.Ok