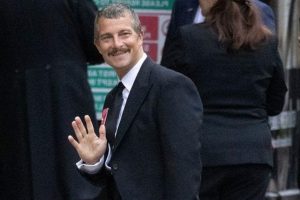 TV adventurer Bear Grylls has apologised after he was spotted looking "cheery" at the Queen's funeral.

Bear, 48, who wore a black suit and tie to the service at Westminster Abbey, was snapped smiling and waving to someone off camera among the mourners during the solemn day on Monday.

The wilderness survival TV star has taken to social media to explain why, while sharing a series of photos from the day.

Bear told his 5.2 million followers on Instagram that he had seen a crew member from his show Running Wild and "didn't mean" to look so cheerful.

He wrote: "Special to see our cameraman on Running Wild @Mungothecameraman selected to film the entrance to the service.

"It was him that I was acknowledging when I waved. I'm so sorry if it looked cheery when it is such a solemn day. I didn't mean that."

He also posted snaps of the Queen's coffin and one of King Charles, his siblings and other royals during the service.

Other photos featured the Princess of Wales Kate Middleton and her children Prince George and Princess Charlotte, including a snap of the three of them walking with Queen Consort Camilla.

Bear, who was awarded an OBE in 2019, wrote: "It’s a day we will never forget… a truly beautiful testament to our Nation’s Sovereign, Her Majesty Queen Elizabeth.

Bear, who is the public face of the Scouts, had previously posted a tribute to the Queen after her death was announced on 8 September.

He wrote: "Today, as a worldwide family of @scouts, and as Chief Scout, we are devastated, and we are united in sorrow for the loss of our Patron, HM The Queen.

"Forever, we will remember her kindness, her service, and the unwavering support she showed our global movement over many decades.

"She was truly a friend to Scouts everywhere. As our Patron, the Queen leaves the brightest of legacies – one of hope and promise for future generations.

"Together, we honour her heart and service, and on behalf of every Scout, we stand united in love and grief. We will never forget you, Your Majesty."

During an appearance on Good Morning Britain last year, Bear revealed he had met Prince George, nine, who is a "big fan" of his, and challenged the young royal to eat an ant.

"He looked at me with those amazing little wide eyes and I said, ‘come on, we’ve got to eat one!

"It was a privilege to give the future King his first ant and his eyes lit up as they do with anyone when they’re out in the wild and they face a few fears and overcome them."