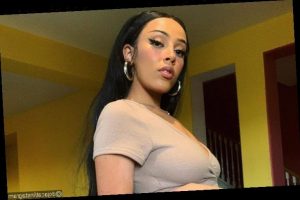 It is said that the ‘Say So’ hitmaker formed online friends in TinyChat with people in the chatrooms who are reportedly known to be alt-righters, racist and misogynistic men who treat women poorly.

AceShowbiz –Doja Cat is trending on Twitter for the all the wrong reasons. #DojaCatIsOver is trending on the blue bird app following the resurface of videos that appeared to reveal the singer’s involvement TinyChat groups which are known to be racist.

It was said that the “Say So” hitmaker formed online friends with people in the chatrooms who are reportedly known to be alt-righters, racist and misogynistic men who treat women poorly. In some videos that found their way out online, Doja could be seen making bigoted remarks, prompting anger from Internet users.

“why doja cat is being cancelled: she was an active member in racist chat rooms and was known for being anti-black. she made a song mocking police brutality,” a fan wrote on the micro-blogging site. In the screenshot picture that the fan attached, someone explained that “Rooms like this (Tea Time) are culturally racist. She goes on for hours at a time and I don’t file like recording or watching her for hours that’s doing too much, but they often say racist things and she jokes along. It’s pathetic to watch but if thats how she raises her self esteem I guess.”

The fan also pointed out that her 2015 song “Dindu Nuffin” was a racist song. The word was deemed to be a “pejorative term used to mock Blacks that commit crimes, and the excuses that’s made for them.”

“I hate those arab people that work at gas station. Like go back to the middle east and blow up a car or something. Lol,” the tweet, which dated back to 2016, read.

Doja was also accused of being homophobic as one screenshot of her 2018 tweet read, “I called a couple people f****ts when I was in high school in 2015 does this mean I don’t deserve support? I’ve said f****t roughly like 15 thousand times in my life. Does saying f****t mean you hate gay people? Do I hate gay people? I don’t think I hate gay people. Gay is ok.”

END_OF_DOCUMENT_TOKEN_TO_BE_REPLACED

END_OF_DOCUMENT_TOKEN_TO_BE_REPLACED
We and our partners use cookies on this site to improve our service, perform analytics, personalize advertising, measure advertising performance, and remember website preferences.Ok