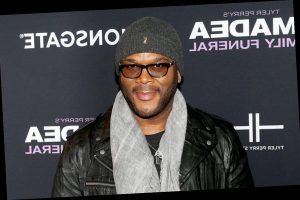 The movie mogul has hopped on his private jet to his hometown of Georgia in order to cast his vote in person in the U.S. senate elections after his ‘absentee ballot never came.’

AceShowbiz -Movie and TV mogul Tyler Perry made a special trip back to his native Georgia on Monday night (04Jan21) to ensure he could cast his vote in the U.S. Senate run-off elections.

The “Madea” star is registered to vote in his home state of Georgia, but was in Jackson Hole, Wyoming for an extended break over the holidays, and by Monday morning, had yet to receive his absentee ballot.

Taking to Twitter to air out his concerns, he wrote, “Hey Georgia, Is anyone else having this problem? I ordered my absentee ballot on December 2nd. I’m told it was mailed on the 4th. I still don’t have it!”

Politician and voting rights activist Stacey Abrams responded to Perry’s tweet and advised him to head to the polls in person to make sure his vote was counted, and that’s exactly what he did, hopping on his private jet to cast his ballot at the polling station.

On Tuesday, Perry returned to Twitter and shared a video message for his fellow Georgians as he proudly displayed his “I Voted!” sticker.

Perry wasn’t the only local heading to the ballot box on Georgia’s crucial election day on Tuesday – rapper Boosie Badazz used his wheelchair to get himself to the polling station in Fulton County to cast his vote for the very first time.

The hip-hop star, who is still recovering from gunshot wounds suffered in an altercation in Dallas, Texas in November (20), revealed he was casting his vote for Reverend Raphael Warnock, the Democratic challenger looking to replace Republican Senator Kelly Loeffler.