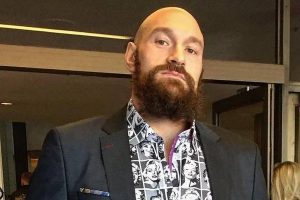 The boxing champion reveals his wife Paris has given birth to a baby girl but the newborn has a rocky start as she has to stay in intensive care following her birth.

The professional boxer and his “Loose Women” star wife Paris welcomed their sixth child together, a baby girl named Athena, on Sunday (08Aug21) morning, and Tyson has revealed the tot is in ICU but is “stable.”

He wrote on Instagram, “Massive thanks for all the messages and support. The baby is in a stable position and doing well – hopefully she comes out of ICU today.”

In February, Tyson – who has previously admitted he wants as many as 11 children – revealed Paris was pregnant again.

He said, “Paris is pregnant again and the Lord has blessed us definitely with another child and I’m very thankful. Got a beautiful wife, beautiful kids, they’re all healthy. That’s the most important thing, you know, your health and your family. Nothing else really matters. Your job, your money, your wealth, your career, none of that really matters because you can get another job, you can start snooker or you can go make more money.”