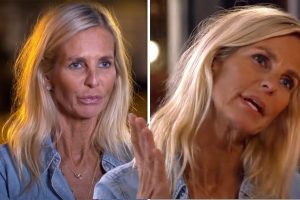 Ulrika Jonsson, 54, has opened up on how arthritis affects her dating life in an interview with Express.co.uk. She admitted activities including going to the cinema can be difficult for her, as she will be in pain if she sits down for a long time.

With the pain often affecting her sleep, Ulrika, who starred on Celebs Go Dating earlier this year, sometimes needs to mention it to prospective partners.

“I will make a joke about it, but it’s whether they believe it,” she explained.

“I am going to be 55 this year, so I’m not young but I’m not super old yet, and as soon as you mention arthritis you think someone is joking about it.

“If I take a long time to get up from a seat or from sitting, if I’ve been to the cinema it will take me a good few minutes to steady myself on my legs.

“It’s not something I’d bring to the table on the first date, but I won’t avoid talking about it, absolutely not.”

While people are generally understanding about Ulrika’s health concerns, she says they tend to forget it quickly.

Although she is “not ashamed” to tell her dates, she thinks it is important to do so because the pain can affect her mobility.

Ulrika has also suffered from degenerative disc disease in her back, and the pain of it impacted her mental health.

“I’ve had this back problem, that’s never going to go away either, and I had a few really tough years,” she said.

“We talk about ageing, but pain and pain management is something people maybe don’t like to admit to.

“We still slightly associate it with moaning, but we all have some sort of pain at some stage.

“But I don’t talk about it publicly, in that respect. I talk to people around me, but it’s a good point and it should be addressed, especially if there are things that can help your pain.”

Ulrika explained that during the four years she experienced “chronic” lower back pain, her mental health was affected.

“I think because arthritis is something I’ve lived with for so long, I’ve come to accept it,” she said.

“You panic if you don’t know what the pain is, or how long it’s going to last.

“I can alleviate the pain that I get from my arthritis. Worst case scenario I might have to take a couple of painkillers.

“I can have a rest, walk around, put a pillow between my knees, before I reach for the painkillers.

“So I try to work with it, it’s not going to go away and it’s unlikely to get better.

“I wouldn’t say [arthritis] affects my mental health, but a bad night’s sleep is not particularly lovely, and that is really frustrating,” she added.