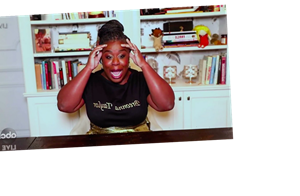 Uzo Aduba just won her third Emmy, this time for Outstanding Supporting Actress in a Limited Series or Movie for her portrayal of Shirley Chisholm in the ensemble biodrama Mrs. America. This marks the actress’ first win outside of Orange Is the New Black.

The actress, who was wearing a simple black T-shirt with Breonna Taylor’s name emblazoned on it, was visibly stunned by her win. Aduba came out on top against fellow nominees Toni Collette, Holland Taylor, Jean Smart, Tracey Ullman (another fellow “Tracy,” Tracy Morgan, took her place in a comedic bit) and Margo Martindale.

“Thank you! Thank you very, very much to the Academy. I want to say a huge thank you to the women that I worked with on Mrs. America across the board and all the women here in this category — Margo, Tracey, Jean, Holland, Toni. I love you ladies. You are all exceptional,” she continued.

Aduba also thanked Shirley Chisholm, whom she portrays in the limited series, for “her championship work for all people who have been forgotten and marginalized, whom she represented.” She also thanked her family, especially her mother “without whom I would not be here.”

“Let’s go change the world,” Aduba ended her acceptance speech, before she left her spot in front of her camera to adorably celebrate with her mother.

On the timely and resonant FX on Hulu limited series about Phyllis Schlafly’s battle against the Equal Rights Amendment and the ongoing women’s rights movement in America, Aduba portrayed the politician who became the first Black candidate for a major party’s nomination for President of the United States and the first woman to run for the Democratic Party’s presidential nomination in 1972.

“It was humbling without question to play Shirley Chisholm,” Aduba told ET about taking on the role. “What she represented, what she did historically as being the first Black woman, Black person to ever run for the highest office in the land. And at that time, you know, she’s standing just outside the window of when the Civil Rights Voting Act was passed. She’s a woman of such command and power and force, it was awesome.”

Aduba’s win in the category came at the expense of her co-stars, Martindale and Ullman. In total, the series was up for 10 Emmys this year, including Outstanding Limited Series.

The 2020 Primetime Emmys hosted by Jimmy Kimmel were broadcast live on ABC.

END_OF_DOCUMENT_TOKEN_TO_BE_REPLACED

END_OF_DOCUMENT_TOKEN_TO_BE_REPLACED
We and our partners use cookies on this site to improve our service, perform analytics, personalize advertising, measure advertising performance, and remember website preferences.Ok