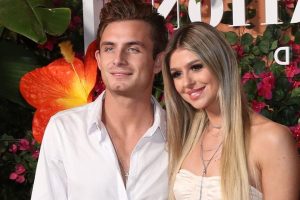 The pair took to Instagram on Sunday to share the exciting news, alongside some stunning snapshots of the proposal, and Leviss’ shiny new sparkler as well.

Leviss shared a group of photos from the big proposal event, which took place Friday night at the same location as where the Coachella Music Festival is held.

The first photo showcased the beautiful (and sizable) diamond engagement ring, from Tiffany & Co., which she displayed proudly on her ring finger in a portrait shot of her hand.

The following pics and clips show some details of the proposal, which Kennedy appeared to go all out for. Hiring DJs and making custom wristbands in the style of Coachella, Kennedy created the aforementioned “Rachella” festival, specifically to pop the question.

Kennedy himself also shared the exciting news to Instagram, posting a snapshot of him and his lady love sharing a romantic kiss.

Kennedy teased his plans to propose during an episode of Overserved with Lisa Vanderpump that aired earlier this month.

During a dinner conversation with Vanderpump, Kennedy, 29, gushed over his ladylove and expressed his interest in taking their relationship to the next level, after dating the 25-year-old beauty pageant star for four years.

“I love Raquel so much, you know that. She really has helped me, and you’ve seen everything she’s stuck by me with,” Kennedy shared. “I really couldn’t imagine myself with anyone else on this planet. I think I’m going to ask her to marry me.”

Congrats to the happy couple!