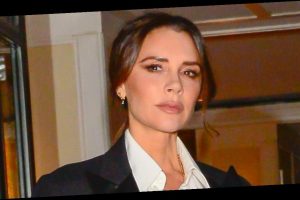 Singer Louise Redknapp raised a few eyebrows last week when she said she’d snog David Beckham if he wasn’t married to his wife of 21 years, Victoria.

The singer, 45, made the cheeky confession while playing a game of Snog, Marry Or Avoid during a one-off gig.

When asked who she’d pick out of the former footballer, Leonardo DiCaprio or Robbie Williams, she joked: “I’d most probably snog them all if they were single,” before adding: “I’m very, very single.”

Now a source has told new magazine her remark has irritated Victoria. “She wasn’t too happy,” the insider revealed.

“She doesn’t like anyone, no matter who it is, saying things about David in any way like that. She can get very jealous – even if it’s in jest.

“Louise would have said it in a jokey way, but apparently Victoria doesn’t find it funny because it’s her man. Louise probably won’t be getting a Christmas card this year!”

The mole added that while Victoria, 46, is used to David, 45, getting female attention, she found Louise’s comment particularly surprising because David is good friends with Louise’s ex-husband Jamie.

“She knows David is good-looking and that other women fancy him because he’s a very handsome guy, but she feels like there was no need to say that,” the source continued. “She didn’t think it was appropriate. David and Jamie are mates and it’s not the thing to say.”

And it’s not just Posh who was reportedly annoyed as Jamie, 47, is also said to be upset by the remark.

“Apparently Jamie didn’t like it,” the insider said. “He isn’t too happy with things she’s said in the past either, or with her new book coming out next year. Jamie has his own book and has hardly mentioned Louise. He doesn’t like it being spoken about and prefers to keep it private.”

Louise and Jamie, who are parents to sons Charley, 16, and Beau, 11, split up in July 2017 after 19 years of marriage. While Louise has remained single, Jamie has since moved on with model Frida Andersson-Lourie.

But the source says Louise is happy being on her own as she’s focusing on her work.

“Louise would love to find someone but she’s taking it slowly,” the mole explained.

“She’s feeling quite hurt. It’s always the guy who seems to rush quite quickly into another relationship and Jamie seems to have got quite serious with someone else. But she’s concentrating on her career and getting her identity back.”