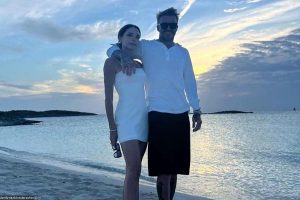 In addition to praising the former soccer player as the ‘best, most loving’ dad in the world, the fashion designer pays tribute to her dad Tony whom she dubs her ‘favourite drinking partner.’

AceShowbiz -Victoria Beckham (Victoria Adams) has hailed David Beckham as the “best, most loving” dad in the world. On Father’s Day, June 19, the singer-turned-designer took to social media to heap praise on the retired soccer star, saying he means “everything” to their family.

The 48-year-old star, who is a mother to 23-year-old Brooklyn Beckham, 19-year-old Romeo Beckham, 17-year-old Cruz Beckham and 10-year-old Harper, wrote on Instagram, “Happy Father’s Day to the best, most loving Daddy in the world!! [heart emojis] We all love you so much @davidbeckham, you are our everything [Earth emoji] (sic)”

Victoria posted a series of photos of David alongside their children. The designer also paid a heartfelt tribute to her dad Tony. Alongside a series of photos of them enjoying some drinks together, she wrote, “Happy Father’s Day to my favourite drinking partner! We all love you so much (sic)”

Earlier in June, David took to social media to express his pride at his involvement with the Queen’s Platinum Jubilee celebrations. The soccer icon expressed his personal pride after his face was beamed onto Buckingham Palace during the star-studded Jubilee concert.

David, who captained the England national team during his playing career, said in a video message to the monarch, “For 70 years you have worked so incredibly hard, not just for the people of this country but also for the whole Commonwealth. Thank you ma’am for your dedication, your service and for everything that you represent. Our country owes you so much.”

David reposted the video clip and said on Instagram, “[Union Jack emoji] My gran would have been so proud right now [crown emoji] Thank you your Majesty. (sic)” Victoria also took to social media to express her pride at her husband’s involvement with the event. She said, “I know how much this means to you, so proud.”