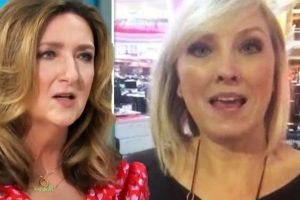 BBC newsreader Victoria Derbyshire has breathed a sigh of relief after her colleague was rescued from a lift at the broadcasting house today. News presenter Martine Croxall, 52, shared how she was trying to be rescued in time to make her live hosting segment, before revealing that it took four men to rescue her from Radio One’s lift.

In view of her 31,400 followers, Martine revealed that the segment would have to go ahead without her as she was indisposed.

She tweeted; “Due on air at 11am but stuck in lift so you might have to start without me…#BBCNews.”

She went on to add that a senior BBC producer was attempting to save her.

“@Daveabpearson is trying to rescue me,” Martine added.

The presenter posted a snap of herself wearing a mask from inside of the lift.

BBC newsreader Victoria reposted her co-star’s call for help to her 161,300 followers, writing “standing by Martine”.

In an update half an hour later, Martine revealed that the rescue mission was successful and that she had been freed.

She commented: “I’ve been rescued by four security men!

“They had to force the doors open and I’m now taking the stairs just to be sure.”

Following the rescue of the BBC presenter, Martine’s followers took to the comments to express their relief that she was finally out.

Justin Ayres penned: “Given the reliability of theses lifts, maybe fitting them with a camera and autocue might be wise.”

Others asked whether she was with Secretary of State for Housing, Michael Gove, who was also reportedly stuck in a lift at the BBC today.

Dace Carter also chipped in: “I would get advice from Michael Gove … probably the only advice I would seek from him,” alongside a winking face emoji.

George Sivell asked Martine: “Was it the same lift that tried to take Michael Gove off air?”

But Martine replied revealing that it wasn’t.

“No, a different one! It’s like Russian roulette,” she wrote back.

Social media users were quick to point out that BBC presenter Jane Hill also found herself stuck in a lift at the broadcasting house recently.

“This happened to @JaneHillNews recently. Facilities and maintenance need to call out the lift supplier me thinks,” Twitter user Ever.Hopeful commented.