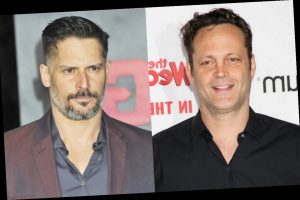 The ‘Wedding Crashers’ actor reveals he and the ‘True Blood’ star have been playing each other online from their own houses during the coronavirus lockdown.

AceShowbiz –Vince Vaughn has been letting his childhood passion for fantasy game Dungeons & Dragons run wild during the COVID-19 lockdown after hooking up with Joe Manganiello‘s league.

The “Swingers” star was introduced to “Dungeon Master” Joe’s game nights by a friend before the coronavirus shut gatherings down, but Vince and company have been playing each other online from their own homes.

And the actor can’t believe his hunky pal Manganiello’s wife, Sofia Vergara, is happy with her husband becoming king of the nerds.

“We started playing these games and when we played Dungeons and Dragons when we were younger, there were no girls around; girls were not excited by Dungeons & Dragons, but his wife, who is beautiful and lovely… she seems to be OK with it,” Vaughn tells chat show host Ellen DeGeneres.

“It’s an odd world, where, like, he’s strong and has muscles and she’s lovely and she’s accepting of him playing the game, so it’s an exciting time.”

“It’s been fun during quarantine because you can kinda play on the computer, online, and so we’ve been doing that, and we’ve been having a very nice time doing that.”

Manganiello recently told “Live With Kelly & Ryan” his Dungeons & Dragons get togethers are so popular they have replaced his Friday poker nights.

The “True Blood” star said, “It was a fun hobby… I started playing again and my friends all started finding out about it and then they wanted to play, so I decided to start running a game for them on Friday nights. Then of course, quarantine hit and I had to figure out how to use the technology on the camera, because I was used to playing in person. I figured out how to do that… and we’ve been able to carry on.”

And Manganiello admitted it takes a lot of hard work to put the weekly games together. “Everyone in the group is pretty hardcore,” he added. “I have to prep the most because I run the game, so it’s a bit like being a showrunner on a longform TV show. I’m writing the story, I’m coming up with all the characters they’re going to meet, where they’re going to go, what they’re gonna do.”