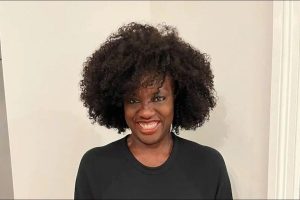 The ‘Suicide Squad’ actress explains she doesn’t have a habit of celebrating her wins but she will mark the milestone if she grabs a Grammy and becomes an EGOT.

AceShowbiz –Viola Davis will “take [herself] out to dinner” if she becomes an EGOT recipient. After winning a host of accolades during her career, including an Emmy, an Oscar and two Tony awards, the 57-year-old actress now reveals how she’ll celebrate if she completes the EGOT set by winning a Grammy.

“It is a surreal title to have, and I thought about it, and I thought to myself, ‘If I achieve that, I may take myself out to dinner.’ And you know, I don’t celebrate my wins, but I’d celebrate that win,” Viola – who has been nominated for a Grammy for “Finding Me: a Memoir“, her self-narrated audiobook – told ‘Entertainment Tonight.

Earlier this month, Viola claimed that her career was “limited” by her skin colour in the early days. The Hollywood star started out in the industry in the late 90s and she often found herself playing supporting characters because the film and TV industry has failed to “dig deep” into her culture.

She said, “There is a deficit of stories that women of colour are able to access in Hollywood. When I started off as an actor, the scope of what I wanted to do was infinite. It was definitely a big blow to see the limitations put on me in my career.”

Viola – who has starred in films such as “The Help” and “Suicide Squad” – recalled being cast in very specific roles during her younger years. She said, “You’re just there to give the white lead advice, to be the sage, to be the nurturer. There is a lack of really digging deep into who we are.”