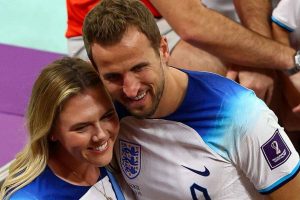 While the England footballers were busy getting themselves prepped to take on France tonight, 10 December, in the World Cup quarter finals, their partners and children got dressed up to cheer them on.

The match is an important one in the tournament as the winner will progress to a semi-final game against Portugal and Morocco, with the victor of those four teams going on to the World Cup final at the Lusail Stadium on 18 December.

But all eyes are on tonight's match, with the England squad set to go up against France in a tense match while their other halves show their support from the sidelines.

The trio were ready for the night as Megan was dressed in a yellow England t-shirt, while Sasha, who is 27 year old Jack Grealish's girlfriend, and Arlo both donned white and blue-themed shirts for the occasion.

"Arlo & his best friend @sasha_rebeccca," Megan wrote over the image with a heart emoji, to which the model responded: "My little boyyyy," with two red heart emojis.

In a short clip, she cheers with flutes of champagne with Connor's mum Gail and pals over what appears to be garlic bread with salad.

Amie, who is mum to three children Henri, Freddie and Louie, then posted snaps of her two eldest kids in the England kit. Over these, she wrote: "I love you… And you," with red heart emojis.

England's 27 year old Luke Shaw's girlfriend Anouska Santos also posted a snap of herself with her son Reign and her pal Mia Walters as they all posed with the peace hand sign up.

And Harry Kane's wife Katie, both 29, also took to her social media to share a picture of her little one in the England kit and a matching hat, over which she wrote: "Let's go Daddy" with a celebration hands emoji.

The celebrations comes after Sasha and her pal Megan recently made the most of their time in Qatar, as they headed out for a luxury pamper day earlier this week.

The pair shared some snaps of their glam day out to Instagram as they visited the lavish Place Vendôme Mall.

Taking to her Instagram Story, Megan shared some photos of a luxury spa, which appears to be inside the glam complex, writing that it was "time for some relaxation."

She then shared another snap of the spa, in which she tagged Sasha, adding that the pair had a "relaxing evening" as they enjoyed some downtime ahead of the England World Cup match.

Following their time at the spa, Megan shared a snap of the inside of the luxe mall, before they headed for some desserts.

The Place Vendôme's website describes the complex as a mall that "exudes grandeur with its palatial setting, exquisite interiors and extravagant architecture."

And Megan's snap certainly show off the grandeur and lavish decor.

While Megan and Sasha didn't show off if they'd made any other purchases on their trip, the mall is full of luxury shops, including Van Cleef & Arpels, a luxe jewellery brand that both women appear to be fans of.

Supporting their partners in a previous match, Sasha sported not one, but two Van Cleef & Arpels bracelets. She appeared to be wearing the 18k yellow gold bracelet which costs £3,750, and the more pricey emerald green version, which is £4,350.

Megan also donned a bracelet from the brand, one that includes diamonds and is believed to be worth £12,500.