Home » Celebrities » Wait, Kim Cattrall Was Never Going to Be Included in the 'Sex and the City' Reboot 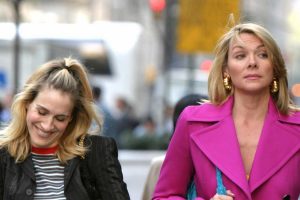 Remember when HBO announced its Sex and the City reboot And Just Like That, and everyone kinda just assumed Kim Cattrall had turned down the offer? Yeahhhh, apparently she was never invited to participate in the show to begin with.

Showrunner Michael Patrick King told The Hollywood Reporter that “And Just Like That was never four [characters],” explaining that the series was always intended to star just Carrie, Miranda, and Charlotte (aka Sarah Jessica Parker, Cynthia Nixon, and Kristin Davis).

Apparently, this is due to the fact that Kim Cattrall made it pretty clear she was over Sex and the City during negotiations about a third film.

Kim did confirm she didn’t want to make a third movie, but also hit back against claims that her alleged “demands” were the reason the film didn’t happen: