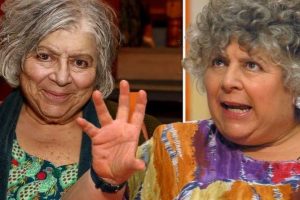 Miriam Margolyes gives opinion on Harry and Meghan in 2020

Harry Potter actor Miriam Margolyes has reflected on the unlikely present her mother gave her when she was just 11-years-old. Speaking to Saturday Kitchen drinks expert Olly Smith on his A Glass With podcast, the Call the Midwife star, 80, explained how she first tasted gin when her mother gifted her a bottle at 11 to welcome her into womanhood.

Mummy thought that it would assist me to get into puberty

While chatting on the podcast, Miriam candidly spoke about the first time she tried gin.

She told Olly Smith: “My mother introduced me to gin, it is traditionally known as ‘mother’s ruin’ isn’t it.”

The iconic actor revealed the reason behind the early introduction.

She explained: “When I started my periods when I was 11, rather young, mummy thought that it would assist me to get into puberty or whatever it’s called, by drinking gin.

“So she suggested it,” Miriam added.

The star told how she associates the boozy tipple with her mother, who she “adores”.

She continued: “It was me being a woman, so I’ve always loved gin ever since.

“It makes me think of my mother whom I adored, it doesn’t make me think of periods particularly,” the star explained.

When prompted by the Saturday Kitchen host to share an insight into her upbringing, Miriam told how her family’s Jewish faith meant that they didn’t often drink.

Miriam went on: “Mummy was an eater and I’m an eater, we didn’t really have wine at home and I think gin was really the only thing that we had.”

The actor previously revealed her property-developer mother Ruth had a stroke after Miriam confided in her that she was gay.

Shortly after Miriam told her mother about her relationship with a woman, Ruth suffered a severe stroke that left her crippled.

Reflecting on the incident, Miriam said: “She was obsessive about me and a worrier by nature, so I can’t be sure it [the shock] didn’t contribute to her stroke.”

Despite losing her mother seven years later, the actor told how she felt more free following her death.

Miriam explained: “Her death liberated me from her, in a way, because although she had met my partner by then and got on with her, Mummy would have had no scruples in trying to divide us.

“In some ways I think it was a good thing that she died when she did because she could have affected my relationship with my partner,” she told The Guardian.

After Ruth told Miriam’s father Joe about her sexual orientation, the actor revealed her father’s extreme reaction, describing him as “appalled and disgusted” by the revelation.

In spite of his reaction, Miriam insisted the news “never affected” the love he had for her.