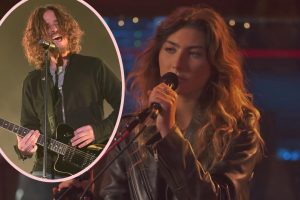 “It’s been so lonely without you here.”

We didn’t think those words could pack an even bigger emotional punch, but in this context, wow, we are floored.

Chris Cornell‘s daughter Toni stopped by The Tonight Show on Thursday for a very special performance in tribute to her father, who we lost way back in May of 2017. No, she didn’t choose Black Hole Sun or any of his other hard-rocking Soundgarden classics. The 17-year-old chose something softer but even more powerful: to do her cover of his rendition of Prince‘s classic Nothing Compares 2 U.

The track is on his posthumous cover album, No One Sings Like You Anymore, Vol. 1, which could get the star one last Grammy next month — and she really does her dad proud here.

See the beautiful moment of a daughter saying goodbye to her father in their shared language of song (below):