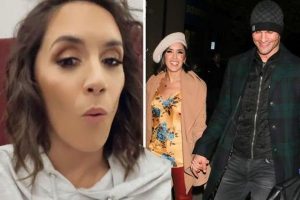 Janette Manrara says she has movie nights with husband on Sundays

Janette Manrara, 38, has refused to rule out starting a family with her husband Aljaz Skorjanec, 31, as the Strictly: It Takes Two host hinted at the couple’s baby plans. The presenter and her Strictly Come Dancing professional husband tied the knot in 2017, and have faced constant speculation about whether they will start a family ever since.

Janette’s latest Instagram Live Q&A was no exception, as one fan took the opportunity to ask if she and Aljaz are “going to have a baby”.

While reading out questions from some of her 475,000 followers, Janette stumbled upon the comment from a curious fan.

Sharing the fan’s question, Janette said: “‘Are you guys going to have a…’

The star then trailed off as she realised what the fan was asking.

She exclaimed with a wry smile: “Oh! The baby question.

It comes after rumours spread amongst fans that Janette was hoping to become a mum for the first time after she stepped down from her role as a dancer on Strictly to host its spin-off programme, Strictly: It Takes Two.

The couple were then asked about whether they find the constant questions about babies frustrating, in a new interview.

Aljaz said: “It’s not so much frustrating, but something else.

“A few months ago, I saw a post from someone who was struggling with having children. Not that we’re going through that, but it shows it’s so personal.

“Out of respect to all the people who can’t have children, I find the topic a sensitive one.”

Janette agreed with her other half, telling The Mirror that they have decided to never share “if we’re struggling or not”.

Addressing their desires for privacy as a couple, Janette replied: “I know I’m on Instagram, but we’re quite private people.

“We’ll never share if we’re struggling or not – it’s our personal process.

“I don’t mind talking about it now and then, but not when it becomes the sole topic of conversation – especially as a woman.”

Janette went on to reveal that Aljaz has always wanted to be a father, but that she has been very focused on her career as a dancer over the past few years.

The star explained: “Aljaz has wanted to be a father since he was 15, so it’s an interesting dynamic that I’ve been such a career woman – but people assume and ask me as the woman.

“I’ve said in the past that we want children and we’ll some day have them – beyond that, I’d like to keep things private.”

Janette was announced as the new host of It Takes Two after Zoe Ball quit the programme.