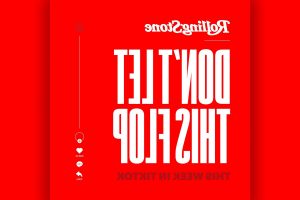 What was really going on when Lauren Zarras visited her boyfriend Robbie at college, surprising him while he sat on a couch with three girls? What was meant to be a sweet, heartwarming video turned into the internet’s hottest relationship scandal, with millions of TikTokers picking apart whether the 20-second clip was definitive proof of Robbie (soon to be known as “Couch Guy”) was cheating — dissecting everything from the time it took him to stand up and walk through the door (five seconds) to what it means that he put his phone on the coffee table after she walked in (literally nothing).

robbie had no idea

♬ still falling for you – audiobear

Don’t Let This Flop hosts EJ Dickson and Brittany Spanos have their own opinions. “My default is, don’t trust the boy — especially when his name is Robbie,” notes Spanos. Dickson agrees: “Assume guilt, when talking about a straight man. Guilty until proven innocent.” After watching roughly 6,000 response videos breaking down theories, they talked to actual body language expert Tracy Brown, who has worked with the FBI, and who reveals which people in the TikTok you should be paying attention to — and it’s not Lauren or Robbie. “Something is going on more than what we know,” Brown tells Rolling Stone.

Brown particularly focuses on Shorts Guy, Robbie’s friend in the video who lets Zarras into the apartment. “Really, what we’re seeing is anxiety. We don’t know why he’s anxious,” she says of Shorts Guy’s body language. “Could it be what one thinks, that he’s having an affair and then she she walked in? Yeah, but could it be, ‘Oh, you know, this could be a great surprise?’ Yeah, it could be that as as well.”