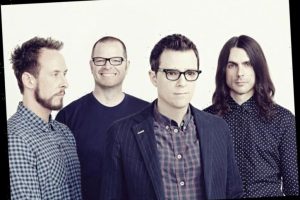 Rivers Cuomo began the performance, singing alone from his home, accompanied by his piano. Other members of the band, Pat Wilson, Brian Bell and Scott Shriner, joined pretty soon, appearing on Cuomo’s TV screen behind.

“Hero,” which was offered by the band as a tribute to essential workers during the COVID-19 crisis, was released on May 6.

The song will appear on Weezer’s next album, Van Weezer. The album was scheduled to be out last month but has been postponed due to the coronavirus.

“Last album we didn’t have any guitars, this one is just all guitars. A hundred guitars,” Cuomo told Zane Lowe on Apple Music‘s Beats 1 of Van Weezer.

The band has also already released “The End of the Game” and “Blue Dream” from the album.