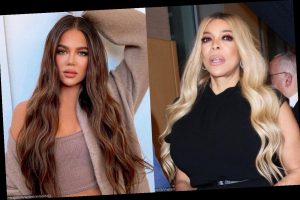 The 56-year-old TV host notes that the ‘Keeping Up with the Kardashians’ star looked different during her appearance on ‘Lady Parts’ segment on ‘The Ellen DeGeneres Show’ on March 10.

AceShowbiz –Wendy Williams thinks that Khloe Kardashian is beautiful without plastic surgery. In a new episode of her talk show, which aired on Thursday, March 11, the 56-year-old TV host claimed that the reality TV star might undergo another plastic surgery.

Wendy noted that the “Keeping Up with the Kardashians” star looked different during her appearance on “Lady Parts” segment on “The Ellen DeGeneres Show” on March 10. “Khloe, Khloe, Khloe I don’t know whether it’s just the nose and the lips, or whether it’s a mini face lift, but you’re only 36-years-old,” Wendy commented.

“I know that you broke the stress of being compared to the rest of your sisters and people making fun of you,” Wendy said. The host then showed a side-by-side photo of Khloe which she called “the original Khloe” and “the Khloe now.”

Wendy went on to say, “Only because she’s only 36, do you understand? There’s certain surgeries and things like that, you should wait until maybe 60. She didn’t need a full facelift. The nose is clearly brand new. The lips are distracting.” Not stopping there, Wendy continued, “It is a lot of work… and she’s only 36. It is a shame. It wasn’t like she needed all of that. Well, the nose job is good though.”

While Wendy was against Khloe allegedly getting work done on her face, she complimented the mom of one for her “original look,” saying that she “was a very beautiful girl.” She also suggested Khloe to “move on” from baby daddy Tristan Thompson, with whom Khloe tried to get a baby No. 2.

“She’s got a big heart and she’s made bad choices with men, I just can’t all blame her. It’s not like you can’t get another. It’s not like it’s guaranteed that he won’t do that to you [again],” Wendy said, referring to Tristan’s numerous cheating scandals when the NBA star was still with Khloe.