Home » Celebrities » What Is Connect BTS? The Boys Are Giving Other Artists The Spotlight

What Is Connect BTS? The Boys Are Giving Other Artists The Spotlight 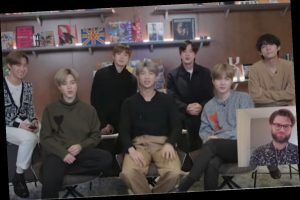 BTS dropped their "Shadow" comeback trailer already, meaning the group’s highly-anticipated new era is in full swing. Luckily, Big Hit shared a "comeback map" with fans, so they can keep up with BTS’ schedule. After the "Shadow" trailer, comes the back-to-back "Connect BTS" events. The map revealed no details about the events whatsoever, except the title and that they had something to do with several cities around the globe, but fans wondered what Connect BTS is, exactly.

Besides online, the comeback schedule revealed the events were related to cities like London, Berlin, Seoul, and New York City. Fans wondered whether they should take off from school or work and book the next flight to the nearest location. There were no details about the events, so fans theorized "Connect BTS" could be a mini concert, a meet and greet, a press tour, or even a scavenger hunt. Meanwhile, other fans believed screens would be set up in the listed locations that will play the group’s latest comeback trailer, hyping fans up for the group’s Feb. 21 comeback.

On Jan. 11, 12, and 13, Jungkook, Suga, and RM shared selfies and captioned them, "#CONNECT_BTS," making fans even more curious as to what it could all mean.

Now, the day has come for the first two "Connect BTS" events: Online and London. On Jan. 14, BTS unveiled their project through a tweet, urging fans to visit it’s official website.

Once there, the site explained the meaning behind the project. It read,

Instead of the project focusing on BTS alone, the group is putting the spotlight on a group of artists who share similar ideas and visions as them. The first artist listed on the site is Jakob Kudsk Steensen, who created the immersive digital simulation "Catharsis."

Fans can learn more about Steensen’s work by clicking on the "London" portion of the site, which reveals his project is located at the Serpentine Gallery in London.

BTS conducted an interview with Steensen to learn more about his work, and you can watch it below.

BTS is continuously pushing themselves creatively every comeback, and fans couldn’t appreciate it more.

END_OF_DOCUMENT_TOKEN_TO_BE_REPLACED

END_OF_DOCUMENT_TOKEN_TO_BE_REPLACED
We and our partners use cookies on this site to improve our service, perform analytics, personalize advertising, measure advertising performance, and remember website preferences.Ok