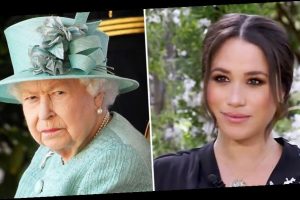 Still showing her respect. Meghan Markle spilled plenty of tea about her experience with the British royal family on Sunday, March 7, but she wasn’t willing to disparage Queen Elizabeth II.

When Did It All Change? Every Revelation From Meghan and Harry’s Interview

“Everyone bows down to the queen and Meghan Markle is no exception, even though she’s technically not a royal anymore,” body language expert Nicole Moore told Us Weekly exclusively after the Suits alum, 39, and Prince Harry sat down for an eye-opening interview following their permanent exit from their senior royal duties. “When asked Meghan about her first meeting with the queen, you could see Meghan’s energy shifted immediately.”

At the beginning of the tell-all, the California native confirmed that she didn’t know what questions were going to be asked about her rocky journey as a duchess. Moore pointed toward the activist’s “look of steady determination” as a sign that she was telling the truth about her interactions with other royal family members — but when it came to the monarch, 94, Meghan appeared to hold her tongue.

“She looked to the left as she gathered her thoughts … and then looked downward before she spoke,” Moore added. “Right before she did, she took a sharp inhale of breath, indicating that she was prepping herself to say what she was about to say. From her body language in this moment, it’s likely that Meghan did not want to say the wrong thing.”

The former lifestyle blogger’s demeanor when asked about Her Royal Highness was noticeably different. “With other answers … Meghan was free flowing and breezy with her words,” Moore explained. “But when she speaks about the queen, everything is measured and methodical. … Meghan had nothing but glowing words to say about the queen; however, her words came out stilted, almost as if she had rehearsed saying something nice about the queen.”

When her husband, 36, revealed that he’s spoken to his grandmother more in the past year than ever before, Meghan couldn’t help but smile. “She nodded her head up and down and was beaming,” Moore said. “Meghan looks genuinely in love with Harry and like she just wants the best for him.”

Meghan and Harry initially announced in January 2020 that they would be stepping away from their senior royal roles. Two months later, the couple settled down in California with their son, Archie, now 22 months. During their no-holds-barred interview on Sunday, the Archewell founders opened up about making the difficult choice to no longer be working members of the royal family after facing a “constant barrage” of bad press in the U.K.

“What I was seeing was history repeating itself, but … definitely far more dangerous, because then you add race in and you add social media in. And when I’m talking about history repeating itself, I’m talking about my mother [Princess Diana],” Harry said, claiming that there was a “lack of support and lack of understanding” for his and Meghan’s experience from “the system” within the palace.

The scrutiny of living in the public eye became so overwhelming that Meghan contemplated suicide in January 2019. “I just didn’t want to be alive anymore,” she admitted, noting that when she asked for help from The Firm, she was turned away.

As the interview continued, the couple revealed that members of the royal family had “concerns” over the color of Archie’s skin and shared insight into how their relationships with their relatives have developed since their exit. However, Moore noticed that both Meghan and Harry “had limits on what they would share” during the sit-down, proving that they “are still loyal to the royal family” despite their challenges.

“They revealed so much and yet, they kept the details of who made the racist comments private,” she told Us. “What this reveals is that, at the end of the day, their mission with this interview was not to tear the royal family down, but to simply set the record straight about their union [and] their decision to exit some of their royal duties.”