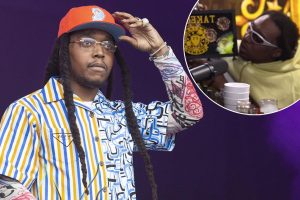 Takeoff just wanted recognition for his work while he was still here to see it.

Following the tragic news of the Migos rapper’s senseless death in a Houston, Texas bowling alley — reportedly over a confrontation over a dice game — a recent interview has surfaced in which the late 28-year-old, born Kirshnik Khari Ball, spoke about death.

While appearing on Drink Champs alongside uncle and fellow Migos rapper Quavo on October 22 to promote their new projects as rap duo Unc & Phew, the late artist got candid about his desire for recognition — before it’s too late. Co-host N.O.R.E. told Takeoff:

“One thing I really, really love about the project is how you shining. Of course you were shining before, but I felt like you were dancing on this one. It was your time to prove. Is that something you had on your mind when you going to do that?”

The rapper then responded:

Wow. He’s actually talking about being appreciated while he’s still alive. How chilling that just less than two weeks later the young star would meet his shocking fate.

As a gesture of good will, the Drink Champs hosts gave Takeoff a plaque of flowers during the podcast. See the full convo (below):

What are your thoughts on the chilling interview, Perezcious readers? Let us know in the comments (below). Rest in peace.