Where will Antonio Brown play in 2019: Oddsmakers break down landing destination for disgruntled Pittsburgh Steelers star 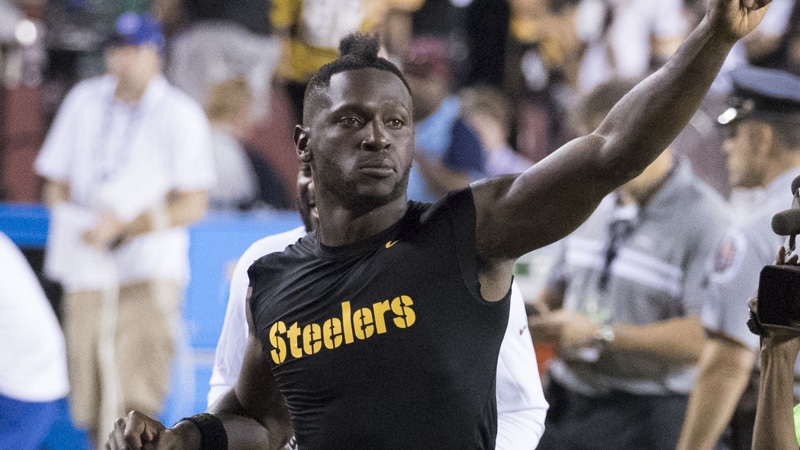 Now that he has demanded a trade, where will Antonio Brown play in 2019 after the Pittsburgh Steelers trade him?

This comes after the Steelers chose to extend Antonio Brown’s contract while placing the franchise tag on running back LeVeon Bell. By doing so, they angered Bell who held out all of 2018 and is set to become a free agent this NFL offseason.

However, it didn’t work out well with Brown either, who started complaining towards the end of the 2018 NFL season, despite his Steelers heading toward the playoffs. His attitude played a part in sabotaging the team and they missed the playoffs.

Now, ESPN reports that Bell wants to be traded.

Where will Antonio Brown play in 2019?

According to Bookmaker odds, the team most likely to swing a trade for Antonio Brown is the San Francisco 49ers. This is no surprise.

In January, ESPN reported that Jerry Rice said Antonio Brown wanted to play for the 49ers. Rice is a Hall of Fame wide receiver and one of the best in the history of the NFL and he spent almost his entire career in San Francisco, from 1985 to 2000.

“I don’t know if it’s going to happen because it’s going to be up to [coach] Kyle Shanahan and also [general manager] John Lynch, but I’m all for it if they want him to come on board.”

The San Francisco 49ers lead the betting odds for where Antonio Brown will play in 2019, with the receiver remaining in Pittsburgh ranking second.

Third in the odds race is “the field” with the New York Jets, Oakland Raiders, Arizona Cardinals, Miami Dolphins, Dallas Cowboys and Indianapolis Colts as the lowest odds.

When will the Steelers trade Antonio Brown?

If the Pittsburgh Steelers trade Antonio Brown — when could this happen?

According to ESPN, Pittsburgh owes Brown a roster bonus of $2.5 million on March 17. They could save that in cash but the best bet is to wait until after June 1.

If the Steelers trade Antonio Brown before June 1, they will have $21.2 million in “dead money” that they can’t use to sign other players. If they wait until after June 1, the hit is only $7.04 million, making more financial sense.

The 2019 NFL Draft takes place on April 25 and many teams will have filled in holes, so finding a trade partner might be hard unless something is worked out ahead of time between the Steelers and another team.