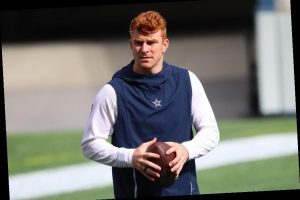 After nine seasons under center for the Cincinnati Bengals, Andy Dalton signed with the Dallas Cowboys as the backup quarterback. But an injury in Week 5 ended Dak Prescott‘s season and now Dalton is getting his chance to step in as the starter for the team.

Since Dalton will be the Cowboys quarterback going forward fans want to know more about him and his wife, Jordan “JJ” Dalton. Here’s more on the couple including what Jordan had to say after the Bengals released her husband.

Andy and Jordan are both from Texas. She grew up in the Dallas suburb of Richardson while her future husband was raised in the Houston suburb of Katy.

The pair met and began dating when they attended Texas Christian University together. They tied the knot on July 9, 2011. A profile about their wedding which included nine bridesmaids, 11 groomsmen, and five ushers was featured in Katy Magazine.

Speaking about their special day JJ told the publication, “It was the best day of our lives. It was the greatest feeling to celebrate our marriage and the fact that we are going to spend the rest of our lives together.”

Three years after saying “I do,” the Daltons welcomed their first child, Noah, in June 2014. Their second son, Nash, arrived in March 2017, and their daughter, Finley Jones, was born in January 2019.

These days, the couple regularly posts photos of each other and their adorable kiddos via social media.

The year they were married, the athlete and his wife started the Andy and JJ Dalton Foundation which helps support sick children in and around the Cincinnati area.

The foundation is described as a “501(c)3 non-profit organization. The primary focus is to provide seriously ill and physically challenged children throughout Greater Cincinnati with daily support and life changing experiences.”

The Daltons are Christian and have explained that their faith is a major part of their work.

“Our faith is at the heart of our foundation and we are inspired by the children and families that we have met along the way,” Andy said (per Bengals.com) during an event at the Hills Church in Florence, Kentucky.

On April 30, the Bengals released Dalton. Upon hearing the news, Jordan posted a goodbye and thank you message to the city they called home for nearly a decade.

“Cincinnati was more than a city to us,” she stated in her post. “It was more than a job.. it was where we started our married life, raised our family, started our foundation and developed friendships that will last a lifetime. It was more than our home away from home… it was our home!! The last few days have been tough as we closed this chapter of our lives.. but the emotions were a beautiful reminder of how much we loved our time here and what it meant to us!”

As the saying goes, when one door closes another opens and on May 2, Dalton signed a contract with the Cowboys. This time Jordan took to social media to express the joy that her hubby was now going to play football back in their home state of Texas.

“We are so excited to be a part of this amazing organization!!” Jordan wrote on Instagram adding, “Andy I couldn’t be more proud of the man you are! Watching you grow through these last 9 years in the NFL has been incredible! There is truly no one else like you! I can’t wait to see what God does this next season of life!! I am so proud of you! Go Cowboys!!”

Today, the family resides in the Dallas-Fort Worth area.

END_OF_DOCUMENT_TOKEN_TO_BE_REPLACED

END_OF_DOCUMENT_TOKEN_TO_BE_REPLACED
We and our partners use cookies on this site to improve our service, perform analytics, personalize advertising, measure advertising performance, and remember website preferences.Ok