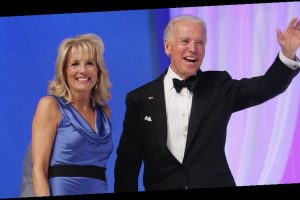 Former Vice President Joe Biden is in the running to become President of the United States, which means that his wife, Dr. Jill Biden, former Second Lady in the White House, is now in the spotlight as well.

Jill was raised in Pennsylvania and moved to Delaware for college. She graduated from Upper Moreland High School in 1969, then went to a junior college in Pennsylvania to study fashion merchandising.

She wed Bill Stevenson in 1970, and they went to the University of Delaware together, but divorced after college. Around the same time, while Joe was senator in 1972, his wife, Neilia, and 1-year-old daughter, Naomi, died in a car accident, while his other two children, Beau and Hunter, were in the car but survived.

Jill met Joe, who is nine years older, on a blind date in 1975, which was coordinated by Joe‘s brother.

“We went out to see A Man and a Woman at the movie theater in Philadelphia, and we really hit it off. When we came home…he shook my hand good night. I went upstairs and called my mother at 1:00 a.m. and said, ‘Mom, I finally met a gentleman,’” she recalled of their first date.

He proposed five times before she accepted.

“By that time, of course, I had fallen in love with the boys, and I really felt that this marriage had to work. Because they had lost their mom, and I couldn’t have them lose another mother. So I had to be 100 percent sure.”

They got married in June of 1977 at the United Nations chapel in New York City, and welcomed daughter Ashley in 1981. They now have five grandchildren together.

Jill worked as an English teacher in local public schools, as well as a psychiatric hospital after graduating from University of Delaware. She earned two masters degrees in reading and in English. She later taught English Composition at Delaware Technical and Community College for 15 years. In 2006, Jill went back to school for another degree: a doctorate in education from the University of Delaware in 2007.

She continued working as a full-time professor at Northern Virginia Community College, and is thought to be the first second lady to hold a paying job during her husband’s time as Vice President.

“If we get to the White House, I’m going to continue to teach. It’s important, and I want people to value teachers and know their contributions and lift up their profession,” she recently vowed.

She also wrote a children’s book, Don’t Forget, God Bless Our Troops, published in 2012, inspired by her granddaughter Natalie when her father, Beau, was deployed to Iraq.

Jill founded the the Biden Breast Health Initiative in Delaware in the early ’90s after four friends were diagnosed. After son Beau was sadly diagnosed with brain cancer in 2013 and died two years later, the couple formed the Biden Cancer Initiative, an organization for cancer researchers, health care providers and patients to develop clinical trials, detection, care and treatment plans.

She is also a runner, and participated in the Komen Race for the Cure in the early ’90s. She reportedly does a five mile run at a nine to 10 minute pace five days a week, along with a little bit of weight training.

These are the celebrities who have endorsed Joe Biden for President.