Home » Celebrities » Who Is Karl-Anthony Towns? Jordyn Woods’ New Man Is Kind Of A Big Deal

Who Is Karl-Anthony Towns? Jordyn Woods’ New Man Is Kind Of A Big Deal 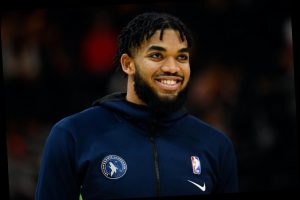 While celebrating her 23th birthday in Cabo San Lucas, Mexico, Jordyn Woods treated her followers to pics of her festivities, her gifts, and — most excitingly — her boo. On Sept. 26, Jordyn Woods’ new boyfriend, Karl-Anthony Towns, made his debut on Woods’ IG grid, and fans are already shipping them. Though the two were reportedly first spotted hanging out in August 2019, per TheShadeRoom, dating rumors picked up again in July 2020 when they were reportedly seen getting dinner at Nobu in Malibu, according to TMZ. Now that they’re IG official, it seems like a good time to get to know Woods’ NBA star beau.

When Towns was only a freshman at the University of Kentucky (where he played alongside Woods’ ex and Kendall Jenner’s current rumored boyfriend, Devin Booker), he was selected by the Minnesota Timberwolves with the first overall pick in the 2015 NBA draft. He’s been with the Timberwolves ever since, and in 2018, Towns even signed a five-year contract extension with the team. After sitting out several games following a knee injury in December 2019, the athlete returned to the court in January only to suffer another setback just a few months later: losing his mother to COVID-19 in April.

There are darknesses in life and there are lights, and you are one of the lights, the light of all lights 💫

There are darknesses in life and there are lights, and you are one of the lights, the light of all lights 💫

According to a source for HollywoodLife, the death of Towns’ mother brought him and Woods closer than ever, since Woods lost her father to cancer back in 2017. "Karl is friends with Jordyn’s entire family and he’s been going through a very tough time since April when his mom died," a source for HollywoodLife reportedly claimed. "Jordyn and her family know exactly what he’s going through so they’ve been there for him every way they can."

Though it’s unclear whether Woods met Towns through her ex Booker, Towns has made it clear he and his old Kentucky teammate are still good friends. Apparently, the two were buds while they were still in high school, where they bonded over both being recruited by John Calipari. "I’ve always believed good people attract good people," Towns said of Booker during an interview with the Arizona Republic in December 2017. "I had a good connection with him and obviously at Kentucky it blossomed into something much more special." Hopefully Towns’ new relationship with Booker’s ex doesn’t make things awkward.

Towns never publicly dated anyone before his relationship with Woods, but he did once catch another celebrity’s eye. While sitting courtside at a Lakers-Timberwolves game in December 2019, Lizzo confessed her crush on Towns. When asked by an interviewer which team she was supporting, Lizzo said, "Let me tell you something, both teams are great. I’m personally cheering for number 32 … That’s my baby." Sadly, it doesn’t seem as though anything ever came of Lizzo’s courtside flirtation.

Here’s hoping Towns and Woods have a long, happy relationship ahead of them.

END_OF_DOCUMENT_TOKEN_TO_BE_REPLACED

END_OF_DOCUMENT_TOKEN_TO_BE_REPLACED
We and our partners use cookies on this site to improve our service, perform analytics, personalize advertising, measure advertising performance, and remember website preferences.Ok