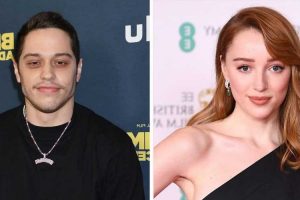 Dear reader, there may be a new match in the Ton. Over the weekend during a Zoom interview, Pete Davidson revealed some information that had fans Bridgerton fans reeling. During a Q&A when asked about his celebrity crush, Davidson responded with a smile, "I'm with my celebrity crush." After a moment he added, "That is all I can speak on." Of course, fans immediately thought of Bridgerton star Phoebe Dynevor, whom he is rumored to be dating, and viewers took his statement quite literally, thinking that she was in the same room as him during the interview. Of course, with the BAFTAs happening in both London and L.A. on Sunday, this author can confirm that Dynevor was in the U.K. over the weekend. So take that as you will.

Rumors that the two were dating started swirling after the SNL star and Younger actress were spotted holding hands and hugging in an English village in March. A source told Us Weekly that the two are trying to figure out long distance, as Davidson resides in Staten Island, NY and Dynevor is filming across the pond.

"Pete and Phoebe are still going strong despite not being able to physically spend time together," the source said. "They keep in touch over text and FaceTime. Right now, they're just focused on work. … They're not looking to rush things."

Another source told Page Six that while the relationship isn't "too serious," the King of Staten Island star must like the actress based on his effort. "Still, Pete must like her if he's flying off to quaint little English villages to hang out with her on set."

Of course, he'll remain in NYC to film SNL and Dynevor will be in England for a while as filming for season two of Bridgerton begins. (Plus, Netflix just greenlit seasons 3 and 4.) So we will patiently await to see if this is a true love match.