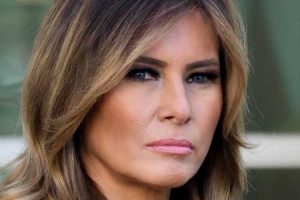 Melania Trump offered her condolences to the royal family after learning of the passing of Queen Elizabeth’s husband, Prince Phillip, on April 9,2021. While she likely meant well when she shared a tribute to the Duke of Edinburgh on her Twitter profile, the former First Lady of the United States was quickly met with backlash over the wording of her message.

The tweet read, “President Trump and I extend our deepest condolences to Her Majesty the Queen, the Royal Family, and the people of Great Britain as the world mourns the loss of Prince Philip.”

As soon as the tweet was shared, Melania was met with hundreds of comment from her fans, followers, and critics, many of whom did not approve of the way she referred to former President Donald Trump as “President Trump” and promptly reminded her that he is no longer in office.

One Twitter user wrote, “I am sorry but ‘President’ who?” Another user advised, “One Term Former Twice Impeached Disgraced Ex President Trump please…be respectful and use his full title.”

As Melania Trump continued to be met with criticism over her “President Trump” tweet, others in the Twitterverse wondered why she seemingly snubbed rapper DMX, who passed away on April 9, 2021 after suffering from a heart attack following an overdose on April 2.

A social media user wrote, “I’m sure you heard about our Brother DMX’s death as well. Another user took a more direct approach, writing, “What about DMX?”

In response, a third person suggested that Melania purposefully failed to send condolences to the late rapper’s loved ones, including the 15 children he left behind, because of his skin color. The tweet read, “DMX is black so, she won’t send a condolence message to his family.”

As fans may recall, the rapper’s family released a statement to People, which read, “Earl was a warrior who fought till the very end. He loved his family with all of his heart and we cherish the times we spent with him. Earl’s music inspired countless fans across the world and his iconic legacy will live on forever. We appreciate all of the love and support during this incredibly difficult time. Please respect our privacy as we grieve the loss of our brother, father, uncle and the man the world knew as DMX. We will share information about his memorial service once details are finalized.”