Why Palace Aides Reportedly Once Rolled Their Eyes At Meghan Markle 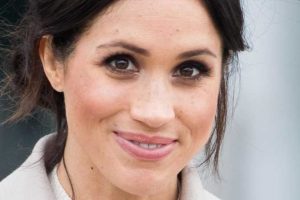 Meghan Markle, the Duchess of Sussex, celebrated her first pregnancy in February 2019 by taking a private jet to New York City for a baby shower with her friends. The trip drew criticism from those within the British royal circle, according to a report in The Daily Mail. Omid Scobie, who is the royal editor at large for Harper’s Bazaar, is featured in a new documentary titled “A Very Royal Baby: From Cradle to Crown,” which delves into the pressure expectant royals face. In an interview for the documentary, Scobie recalls Markle’s five-day baby shower celebration with approximately 20 of her closest friends, which he reported in Harper’s Bazaar included Serena Williams, Priyanka Chopra Jonas, Gayle King, and Amal Clooney.

“I remember speaking to a palace aide at the time who rolled their eyes, they were horrified that something so common was happening within the House of Windsor,” Scobie says in the documentary. Prince Harry and his wife’s first son, Archie, was later born May 6, 2019, at Portland Hospital in London.

Prince Harry and Meghan Markle are expecting their second child

The documentary “A Very Royal Baby: From Cradle to Crown” aired on Channel 4 in the United Kingdom this week. The description for the film reads, “What does it mean to be born royal? This insight into the arrival of Harry and Meghan’s second child looks at the pressures faced by royal mums-to-be and how attitudes to pregnancy have changed.”

Meghan Markle and Prince Harry are expecting their second child, although their exact due date isn’t known, according to Elle. The couple revealed they were expecting a daughter during their March 2021 interview with Oprah Winfrey, but they didn’t reveal many other details about their second pregnancy. The Duchess of Sussex was advised against traveling for Prince Phillip’s funeral in April, which indicates she is likely due this summer. The Mayo Clinic advises women who are more than 36 weeks pregnant against flying.

While the couple has faced a lot of criticism since their televised interview with Oprah, that doesn’t mean the the public isn’t excited about the newest addition to their family. According to People, betting sites are ripe with fans looking to earn some money on the expected royal baby name. As of right now, the odds seem to be in favor of Philippa, in honor of Prince’s Harry’s late grandfather.